When I started my PhD to gain understanding of factors affecting the plight of bats living in our cities, I had no idea I'd be stuffing a freezer full of faeces one day.

Sorry - I'm getting ahead of myself.

My study, which was published in Biology Letters last week, explored to what extent native animals living in our cities, namely bats, suffer from predation in patches of urban bushland.

And it involved a lot of bat poo.

Based in Sydney, I found myself attracted to the idea of working on a highly diverse and intriguing group of native mammals - the insect-eating bats.

There are 19 species of bats in Sydney, making them the most diverse group of mammals remaining in the city.

Like all animals, they have specific habitat requirements, where many need to sleep during the day (or "roost") in cavities in old trees or in caves.

A handful of studies have observed that bats suffer from predation by snakes and birds of prey, which sit and wait for them to leave their roosts at night.

You might have seen your cat mimic such behaviour in your own yard, knowing where something to eat is and waiting until the right time to pounce!

Bats are clever animals though, and may have evolved strategies to evade such attacks.

They can roost by themselves, but often they can be found in large groups all huddled together in a tree cavity, or hollow. They also switch which areas they roost in, and many switch trees or switch cavities every few nights.

As you could imagine, large groups of animals all sleeping and defecating in the same place every night makes for a very smelly bed!

And that smell is all the information predators such a black rats (Rattus rattus), foxes and cats, need to work out exactly where to sit and wait to prey upon bats.

So do bats suffer from high predation rates in our cities?

To tackle this question, I could have tried to find as many roost sites as possible and monitored how many predators visit and attempt to attack bats at their roosts.

But apart from caves, roost sites such as tree hollows are almost impossible to see, and to find which trees in a patch of bushland have roosting bats is like finding a needle in a haystack.

So to investigate what predation pressure bats are under in cities, I decided to take an experimental approach.

I went about setting up a study similar to that done for birds' nests, using artificial nests but real odour, to see what predators out there would respond to odour cues.

By odour cues, I mean bat poo - and I needed several kilograms of it in order to run a broad-scale experiment.

I enlisted a team of helpers who also work on bats, and had many people collecting bat poo for me from all sources around Sydney.

In biodiversity surveys, bats are often caught using nets and held in small bags for identification. During the time they are in the care of the researcher, they often defecate in their holding bag.

All of the poo produced during such bat surveys was collected and used in my experiment, and I froze it to retain its smell, ready for use.

I then set up many artificial bat roosts around patches of urban bushland in Sydney and allowed the animals in the area to get used to the structures for a week.

Any animal just curious of my artificial roost would investigate it, and then lose interest after a few days.

Then I added bat poo in different quantities to the artificial roosts.

We added bat poo to the roosts every day, and monitored how many potential predators in the area responded to the odour cue by watching them on infrared motion-sensor cameras.

We also stuck plasticine at the entrance to the roosts, so we could look at bite marks and footprints to identify who was visiting, and when.

I found that common urban species including the black rat and the ringtail possum (Pseudocheirus peregrinus) were quickly attracted to even small amounts of bat poo.

This means that bats roosting alone, rather than in groups, are more vulnerable to predation at their roost.

In addition to this, we found no effect of switching, so bats trying to evade predation by moving roosts every few days may still be found by scent-seeking predators.

Our results suggest that generalist urban predators may investigate all potential roost sites, making bats very vulnerable to decline, particularly in areas where predator densities are high, such as on islands and in urban environments.

This means that potential roost trees in urban areas should be retained and protected, so there are enough areas for bats to hide to evade predators sniffing them out!

Now in Melbourne, I'm working on similar projects that aim to increase our knowledge about what factors influence the persistence of native animals in urban areas, and how we can create more ecologically sustainable cities that contain a diversity of species to enrich us all.

None of those projects involve collecting faeces, though. 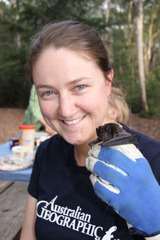