Orang-utans play video games too, and it can enrich their lives in the zoo

Orang-utans play video games too, and it can enrich their lives in the zoo

Visiting the orang-utans at the zoo brings us face to face with some of our closest relatives. Moments of connection with these intelligent creatures can be powerfully emotional.

We heard recently about the amazing experience of a visitor to Melbourne Zoo who sat to breastfeed her child and was watched with interest by a female orang-utan.

Families are also regularly captivated by the antics of the Zoo's youngest orang-utan, who seems to delight in playing near children on the other side of the glass.

Now Zoos Victoria and technology researchers are collaborating to explore whether digital technologies could let orang-utans choose to interact safely with visitors in entirely new ways.

For modern zoo organisations such as Zoos Victoria, the animals' wellbeing is top priority. Cognitive enrichment is vital, particularly for species such as primates and elephants which evolved astonishing intelligence and problem-solving skills to meet the challenges of survival in the wild.

Research suggests that orang-utans like to watch what's happening on the visitors' side of the glass, and interacting with visitors could be an important form of enrichment for them.

There is a real art to developing enrichment that encourages smart animals to use their intellect to explore and solve problems. On occasion, keepers at Melbourne Zoo have taken hours to prepare a new fiendish food puzzle, only to see the orang-utans solve it in a matter of minutes.

And of course enrichment must be safe and robust (an orang-utan can be nine times stronger than a human), which limits the equipment that zoos can use.

To continue to provide novelty and variety, primate keepers have started to add digital enrichment to the range of existing activities. At Melbourne, and a number of other zoos, orang-utans have learned to use a tablet computer through the wire of the enclosure to play with chase games, music-making and painting apps.

As a team of technology researchers and zoos professionals, we are investigating new forms of digital enrichment. Our collaboration began as the result of a happy accident: a Melbourne Zoo staff member happened to visit the Microsoft Research Centre for Social Natural User Interfaces, and had the opportunity to play a video game with the Microsoft Xbox and Kinect body tracker.

She quickly realised that motion-based games could provide entirely new ways to address the challenges of orang-utan enrichment.

Computer-based enrichment is an attractive prospect for zoos. It could be easily modified to provide new challenges, or tailored to an individual orang-utan's skill level. It overcomes some of the safety issues of introducing new physical objects. And it might allow animals a choice of enrichment when keepers are not available.

We have created an interactive projection which works like a touchscreen on the floor, using a projector and a Microsoft Kinect body tracker placed outside the enclosure. Recently we have been trialling simple games to show the orang-utans that this interactive projection responds to their touch, and start investigating how they might use it.

In our first game, which has proven a big success, large coloured dots move around the projection and explode in pulsing waves of colour when touched. The interests of Melbourne Zoo's orang-utans have inspired some of our apps, including one which allows the animals to view photos or videos, choosing them from a gallery.

By not rewarding them for using the projection, we have been able to investigate how interesting this enrichment is to them, see how intuitively they take to it, and see their preferred ways of interacting with it.

The six orang-utans at Melbourne Zoo have all tried out the interactive projection, and most seem to have learned that fun things happen when they touch the bright moving shapes on the floor.

Excitingly, they have shown us some unexpected styles of interaction, such as kissing the projection, sweeping it with the back of the hand, exploring how it works with physical objects and even swooshing a cloth at it from above.

We hope that digital technology will allow animals greater choice over their environment and enrichment. A first step will be for orang-utans to choose which game to play.

In the future, they might be given control over lighting or temperature, or perhaps even feeding schedules and interaction with other animals or humans.

As orang-utans seem to find humans interesting, we are experimenting with creating a shared digital space where orang-utans can choose to interact safely with keepers and even visitors.

In our first trial of a game for humans and orang-utans, we saw with delight that they chose to play even with people they had not met before, creating a powerful sense of connection for the human player.

The day is perhaps not far off when digital technology might let you get closer than ever to our primate cousins. 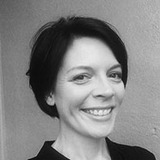