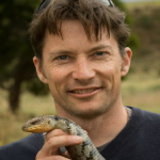 I completed my undergraduate studies in Botany and Zoology at Monash University where I obtained a BSc(Honours) in 1998. I then obtained his PhD.

in Zoology at the University of Sydney under the guidance of Prof. Richard Shine in 2004. This included a one year Fulbright fellowship the USA where I collaborated with Prof. Kellar Autumn at Lewis and Clark College in Portland Oregon, and Prof. Warren Porter at the University of Wisconsin in Madison, Wisconsin. I then took up an Australian Research Council Postdoctoral Fellow at the Centre for Environmental Stress and Adaptation Research (CESAR) from 2004-2006. I joined the Zoology Department as a lecturer in 2007.

The impact of climate on animals

My research in this field is focused on understanding how climate impacts on the distribution and abundance of terrestrial animals. My approach combines laboratory and field investigations of ecophysiology and behaviour. A particular focus is on developing trait-based, mechanistic models that enable predictions of distributions under current and future climates with GIS data. I have been working with Prof. Warren Porter at The University of Wisconsin to develop computer programs that use energy balance equations and microclimate models to predict how traits (behaviour, morphology and physiology) of organisms interact with climatic conditions to affect key fitness components such as potential activity time, development and growth rates, water balance and food requirements. Importantly, this trait-based approach makes it possible to incorporate evolutionary change. Current and widely-used regression-based approaches to this problem are unable to incorporate evolution because they use the distribution points of the organism as a starting point rather than its traits. The trait-based models we are developing work for any kind of ectotherm or endotherm and hold great promise for enhancing our understanding of the adaptive significance of climate-sensitive traits, for looking at selection gradients across landscapes, and of course for predicting the impact of climate change.

The evolution of parthenogenesis

The maintenance of sexual reproduction is regarded as a major unsolved problem in evolutionary biology. My research has focused on species that have secondarily lost sexual reproduction and instead reproduce by parthenogenesis. There are strong geographical and genetic correlates of the transition from sex to parthenogenesis. Specifically their distributions are often biased towards high latitudes, high altitudes or arid environments. For instance, in the Australian arid zone, we find multiple instances of parthenogenesis in lizards, insects and plants. Parthenogenetic organisms are also very often polypoids, hybrids or both.

I am interested in extent to which the ecological and geographical tendencies of parthenogenetic organisms are influenced by hybridization and by polyploidy. We need to answer this question if we are to truly understand the relevance of naturally parthenogenetic organisms to the paradox of sex. I approach this question using a number of parthenogenetic organisms from the Australian arid zone, including the grasshopper Warramaba virgo, the stick insects Sipyloidea nelida and S. similis, and the gecko Heteronotia binoei. I combine phylogeographic analysis, life-history and ecophysiological studies to compare the ecology and evolution of the parthenogenetic lineages with that of their sexual progenitors. An exciting prospect in this research is the ability, at least in W. virgo, to artificially synthesize hybrid and polyploid lineages. My collaborators in this reserach are Prof. Craig Mortiz (The University of Califorina, Berkeley) and Dr. Mark Blacket (The University of Melbourne).

How will snow alter exposure of organisms to cold stress under climate warming?

Displaying the 22 most recent projects by Michael Kearney.

This project aims to use matchstick grasshoppers as a model system to develop strategies and protocols for maximising the adaptive potential..

Grasshopper Country Before And After: A Resurvey Of Ken Key’S Collecting Expedition

This project seeks to characterise and predict the responses of invertebrates to climate variability and climate change. Alterations to the ..

Hydroregulation - A Missing Piece Of The Climate Change Puzzle

There is a great need for process-explicit approaches to the puzzle of how organisms will respond to changes in temperature and rainfall. To..

Weather Forecasts For Plants And Animals

There are striking similarities in the way plants and animals take up and use energy (metabolism), despite enormous variation in size and li..

An Integrated Mechanistic Model Of Species' Responses To Environmental Change: From Individual Responses To Range Shifts And Beyond

To effectively adapt to future environmental change, reliable forecasts are needed of how human alterations to climate and habitat will affe..

Conserving biodiversity when faced with rapid changes in climate and land use is a major challenge facing conservation managers. Translocati..

Climate change is a principal threat to biodiversity and ecosystem health. The loss of ecosystem services from loss of species and ecosystem..

Climate change is a principal threat to biodiversity and ecosystem health. The loss of ecosystem services from loss of species and ecosystem..

Predicting And Monitoring Climate Change In Insects: From Genes To Distribution Shifts

Predicting And Monitoring Climate Change In Insects: From Genes To Distribution Shifts

Human-Induced Changes In The Genetic Structure Of Amphibian Populations

This study will produce one of the first predictive models of the impact of humans on the genetic structure of animal populations. It will c..

Are Natural Clones Specialists Or Generalists? Using A Model System To Test Alternative Hypotheses For The Advantages Of Parthenogenesis

Parthenogenetic organisms are all-female and reproduce clonally. Through discovering why these unusual organisms are sometimes successful we..

We will dissect the interaction between an Australian butterfly and changing climate. This will make significant contributions to the nation..

Hybridization, Polyploidy And The Evolution Of Parthenogenesis In The Australian Desert

This project considers the ecology and evolution of Australian animals that reproduce by parthenogenesis, i.e. without sex. These animals ha..

Human-Induced Changes In The Genetic Structure Of Amphibian Populations

This study will produce one of the first predictive models of the impact of humans on the genetic structure of animal populations. It will c..

Displaying the 155 most recent scholarly works by Michael Kearney.

1. The vulnerability of species to climate change is jointly influenced by geographic phenotypic variation, acclimation, and behav..

How will snow alter exposure of organisms to cold stress under climate warming?

Insights into the causal mechanisms that limit species distributions are likely to improve our ability to anticipate species range..

Knowing where species occur is fundamental to many ecological and environmental applications. Species distribution models (SDMs) a..

MicroclimOz - A microclimate data set for Australia, with example applications

The origin and maintenance of metabolic allometry in animals

Journal article  |  2019  |  Proceedings of the Royal Society B: Biological Sciences

The matchstick grasshopper genus Warramaba (Morabidae: Morabinae): a description of four new species and a photographic guide to the group

Under the weather?-The direct effects of climate warming on a threatened desert lizard are mediated by their activity phase and burrow system

Feeling the pressure at home: Predator activity at the burrow entrance of an endangered arid-zone skink

Advances in Monitoring and Modelling Climate at Ecologically Relevant Scales

NicheMapR - an R package for biophysical modelling: the microclimate model

The universality of the von Bertalanffy growth curve Comment on: "Physics of metabolic organization" by Marko Jusup et al.

Mechanistic variables can enhance predictive models of endotherm distributions: the American pika under current, past, and future climates

The effect of egg size on hatch time and metabolic rate: theoretical and empirical insights on developing insect embryos

Color Change for Thermoregulation versus Camouflage in Free-Ranging Lizards

The embryos of many egg-laying species develop under the environmental conditions selected by one or both parents, and these condi..

One lump or two? Explaining a major latitudinal transition in reproductive allocation in a viviparous lizard

Journal article  |  2016  |  Proceedings of the Royal Society B: Biological Sciences

A continent-wide analysis of the shade requirements of red and western grey kangaroos.

Foraging time may be constrained by a suite of phenomena including weather, which can restrict a species' activity and energy inta..

Ontogenetic and interspecific scaling of consumption in insects

Has contemporary climate change played a role in population declines of the lizard Ctenophorus decresii from semi-arid Australia?

Journal article  |  2015  |  Proceedings of the Royal Society B: Biological Sciences

Couples that have chemistry: when ecological theories meet

Bergmann meets Scholander: geographical variation in body size and insulation in the koala is related to climate

Is fire a threatening process for Liopholis kintorei, a nationally listed threatened skink?

Journal article  |  2014  |  Proceedings of the National Academy of Sciences

Climate sensitivity, thermal safety, and the importance of behavior across latitude and elevation

SPATIO-TEMPORAL CHANGES IN THE STRUCTURE OF AN AUSTRALIAN FROG HYBRID ZONE: A 40-YEAR PERSPECTIVE

Activity restriction and the mechanistic basis for extinctions under climate warming

Molecular patterns of introgression in a classic hybrid zone between the Australian tree frogs, Litoria ewingii and L.paraewingi: evidence of a tension zone

Linking Eco-Energetics and Eco-Hydrology to Select Sites for the Assisted Colonization of Australia's Rarest Reptile.

Assisted colonization-the deliberate translocation of species from unsuitable to suitable regions-is a controversial management to..

Correlation and process in species distribution models: bridging a dichotomy

B Helmuth, MR Kearney, A Matzelle

Metabolic theory, life history and the distribution of a terrestrial ectotherm

A Manipulative Test of Competing Theories for Metabolic Scaling

The "covariation method" for estimating the parameters of the standard Dynamic Energy Budget model II: Properties and preliminary patterns

The "covariation method" for estimating the parameters of the standard Dynamic Energy Budget model I: Philosophy and approach

Mechanisms and consequences of changing body size: reply to Bickford et al. and McCauley and Mabry

Journal article  |  2011  |  Proceedings of the Royal Society B: Biological Sciences

Thermal Sensitivity of Aedes aegypti From Australia: Empirical Data and Prediction of Effects on Distribution

A cost-effective method of assessing thermal habitat quality for endotherms

The Extinction of Dengue through Natural Vulnerability of Its Vectors

The art of modelling range-shifting species

Early emergence in a butterfly causally linked to anthropogenic warming

Size, shape, and the thermal niche of endotherms

Stasipatric speciation: resurrecting a system to bury a hypothesis?

Lost Sex in the Reptiles: Constraints and Correlations

Lost sex in the reptiles: Constraints and correlations

The evolution of sexual and parthenogenetic Warramaba: a window onto Plio-Pleistocene diversification processes in an arid biome

Predicting the fate of a living fossil: how will global warming affect sex determination and hatching phenology in tuatara?

Birth of a biome: insights into the assembly and maintenance of the Australian arid zone biota

The toad ahead: challenges of modelling the range and spread of an invasive species

Habitat, environment and niche: what are we modelling?

Response to Kearney and Porter: Both functional and community ecologists need to do more for each other

Waves of parthenogenesis in the desert: evidence for the parallel loss of sex in a grasshopper and a gecko from Australia

Mapping the fundamental niche: Physiology, climate, and the distribution of a nocturnal lizard

Why is sex so unpopular in the Australian desert?

Geographic parthenogenesis in the Australian arid zone: II. Climatic analysis of orthopteroid insects of the genera Warramaba and Sipyloidea

Geographic parthenogenesis in the Australian arid zone: I. A climatic analysis of the Heteronotia binoei complex (Gekkonidae)

Sociality in lizards: Why do thick-tailed geckos (Nephrurus milii) aggregate?

Why do geckos group? An analysis of "social" aggregations in two species of Australian lizards

Do nocturnal ectotherms thermoregulate? A study of the temperate gecko Christinus marmoratus

Do nocturnal ectotherms thermoregulate? a study of the temperate gecko christinus marmoratus

Displaying the 4 most recent news articles by Michael Kearney.

Recognition of Achievement for a Research Paper

The University of Melbourne
2008

Deans Award for Excellence in Research

The University of Melbourne
2005

Australasian Society for the Study of Evolution