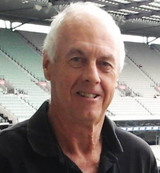 Professor Johnston obtained a Bachelor’s degree in civil engineering in 1968 and a Ph.D. in 1972 from the University of Southampton (UK). After 3 years in industry, he joined Monash University where he was a lecturer, senior lecturer and associate professor.

In 1993, he was appointed Professor and Dean of Engineering at Victoria University of Technology. In February 1998, he returned to full time consulting with Coffey Geotechnics where he was a Senior Principal. He joined the University of Melbourne in May 2009 as Professor of Geotechnical Engineering.
Although Professor Johnston’s consulting and research interests have covered a wide range of topics, he is probably best known for his work on soft, weak and weathered rock in civil and mining engineering. He has made many presentations on this general subject and others at local, national and international conferences. He has published over 120 technical papers including about 60 in refereed international journals. He has undertaken substantial consulting work on many projects in Australia and overseas both as an academic and as a consultant. He has also had considerable involvement with forensic geotechnical engineering and matters involving expert witness services for litigation and arbitration.
From 2012 to 2016 he was a member of the Technical Review Board which has a primary function to provide independent advice to assist the Victorian Minister for Energy and Resources and industry better manage ground control associated with mining in Victoria, in order to mitigate the risks this presents to public safety, environment, public infrastructure and security of power supply.
When he returned to a full-time academic position in 2009, Professor Johnston developed a strong interest in direct geothermal energy (or geoexchange) in which the ground relatively close to the surface is used as a source and sink for heat to heat and cool buildings. His research group developed several instrumented field test sites around Victoria to provide performance data for these systems. This data has led to more efficient and effective design methods for Victorian and Australian conditions.
At the end of 2015, Professor Johnston retired from the university although he maintains an active research interest through his appointment as an Honorary Professorial Fellow. He also continues to undertake consulting assignments.
He has been the recipient of several teaching and research awards including the E.H. Davis Memorial Award from the Australian Geomechanics Society in 1991 for "distinguished recent contributions to the theory and practice of geomechanics in Australia". He was also the recipient of the Australian Geomechanics Society’s highest award, the John Jaeger Memorial Award, in 2012 for “contributions of the highest order over a lifetime commitment to the geotechnical profession in Australia”. He has held offices in several learned societies, professional associations, educational boards, advisory panels and standards committees including the Founding Editor of Australian Geomechanics, Chairman of the International Society for Soil Mechanics and Geotechnical Engineering Committee on Soft Rock and Vice President and Board Member for Australasia for the International Society for Rock Mechanics.
In January 2017, Professor Johnston was appointed an Officer in the General Division of the Order of Australia (AO) “For distinguished service to engineering, as an academic, researcher, practitioner and consultant, particularly in the fields of structural foundation engineering and geothermal energy”.

The application of retaining walls and slabs as energy structures in underground train sta..

Investigation of the effect of seasonal variation in ground temperature on thermal respons..

Displaying the 2 most recent projects by Ian Johnston.

Displaying the 99 most recent scholarly works by Ian Johnston.

Uncertainties in the design of ground heat exchangers

Journal article  |  2016  |  Geomechanics for Energy and the Environment

Journal article  |  2014  |  Proceedings of the Royal Society of Victoria

There is currently a great deal of interest in the problem of driver distraction. Most research focuses on distractions from insid..

Sustainable transport - Separating the meaning from the mantra

An analysis of crashes involving median encroachments on high-speed roads

B Corben, A Tingvall, M Fitzharris, S Newstead, I Johnston

Will a 4WD strategy work in the shifting sands of policy?

A comparison of algorithms for profile reduction of sparse matrices

Geotechnical materials and the critical state

Rational determination of the engineering properties of soft roclcs

Fracture testing of a soft rock with semi-circular specimens under three-point bending. Part 1-mode I

Movement of foundations on rock

The use of transition elements

Relationship between fracture toughness and tensile strength for geomaterials

A numerical model for pressuremeter testing in soft rock

The interpretation of pressuremeter tests in weak rock - theoretical analysis

Determination of the fracture toughness of a saturated soft rock

Although the literature provides a reasonable range of information concerning the fracture toughness of relatively hard rocks, the..

Relationship between fracture toughness and tensile strength for geomaterials

INFLUENCE OF COMPRESSIBLE SEAMS ON MODULI DETERMINED BY A PRESSUREMETER.

The uniaxial properties of Melbourne mudstone

The uniaxial properties of Melbourne mudstone.

CONSOLIDATION PROPERTIES OF A SOFT ROCK.

The consolidation properties of a soft rock.

The Influence of Electro-Osmosis on Metallic Piles in Clay

Journal article  |  1980  |  Environmental Conference, Proceedings of the Technical Association of the Pulp and Paper Industry

EFFECTS OF DRAINAGE CONDITIONS AND CONFINING PRESSURES ON THE STRENGTH OF MELBOURNE MUDSTONE.

Journal article  |  1980  |  Environmental Conference, Proceedings of the Technical Association of the Pulp and Paper Industry

Displaying the most recent news article by Ian Johnston.

Officer of the Order of Australia

E.H. Davis Memorial Lecture for distinguished recent contributions to the theory and practice of geomechanics in Australia