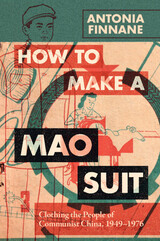 Antonia Finnane is interested in cultural and technological changes affecting patterns of daily life of people in China, past and present. She is currently writing a book about clothing in Maoist China: who made the clothes, how they were made, what they looked like and signified.

She first visited China in 1972, when studying Chinese as an undergraduate at the University of Sydney. Her early research was in the area of urban history, the focus of PhD research undertaken at the ANU, and later of her prize-winning book, Speaking of Yangzhou: A Chinese City, 1550-1850 (Harvard, 2004). An interest in Chinese urban society led to major research project on consumption and fashion, resulting in a critically acclaimed book, Changing Clothes in China (Columbia UP 2008), and in essays in areas ranging from fashion to department stores. Current research, funded by the Australian Research Council, concerns production and consumption in Maoist China, with a focus on clothing manufacture in Beijing and Shanghai. Her Australian base has also meant engagement with Australia's Chinese history: she has written on Jewish migration from post-war Shanghai, and is at present researching the Chinese community in between-the-wars Perth. Essays on contemporary issues arising from this research have been published in Inside Story, The Conversation, and The Deal. Antonia has studied and worked in China for varying periods in her career, beginning with language study in Beijing in the 1970s, and including a period of five years 2008-2013. For a number of years prior to her retirement at the end of 2018, she also taught an intensive subject in China, taking Melbourne University students to Nanjing University. Now an honorary professorial fellow in the School of Historical and Philosophical Studies, she is the principal supervisor for five PhD students working in Chinese and Australian history, and associate supervisor for another four, all in Asia-related areas..

Disappearing from the picture? Female Figures in Pattern Books of the Mao Years

The Fate Of The Artisan In Revolutionary China: Tailors In Beijing, 1930s-1960s.

Between Beijing and Shanghai: fashion in the Party state

Memory And Commemoration In Asia And The West: An International Workshop

Displaying the 5 most recent projects by Antonia Finnane.

The Fate Of The Artisan In Revolutionary China: Tailors In Beijing, 1930s-1960s.

This study of tailors and garment production in mid-twentieth century Beijing explores the effects of Communism on the city's foremost handi..

Memory And Commemoration In Asia And The West: An International Workshop

Fashionable Times: An Inquiry Into The History Of China'S Modernity

Fashion, once regarded as a purely Western phenomenon and equated with thoroughly modern life, has recently made an improbable appearance in..

Displaying the 69 most recent scholarly works by Antonia Finnane.

Disappearing from the picture? Female Figures in Pattern Books of the Mao Years

This article explores a lesser known source of graphic images of male and female figures produced during the early decades of the ..

Between Beijing and Shanghai: fashion in the Party state

Shanghai has been hailed as the future "Paris" of world fashion. An examination of how it is faring vis-a-vis Beijing and in the ..

Everywhere we look, people are using fashion to communicate self and society - who they are, and where they belong. This book pres..

Textiles and Apparel in the Mao Years: Uniformity, Variety and the Limits of Autarchy

‘Engels never rode in a plane’, said Deng Xiaoping in 1978, ‘and Stalin never wore Dacron’. His point was that the Party had to lo..

Not just the Mao suit: Chinese fashion in the Mao years

What were the sources of Chinese clothing designs in the Mao years? The usual answers would be the Sun Yatsen suit and military u..

How should the history of daily life be approached? In Daily Life in China on the Eve of the Mongol Invasion, Jacques Gernet grapp..

Furnishing the home in Qing Yangzhou: a Case for Rethinking "Consumer Restraint"

Debates born of the flourishing field of consumption studies in the West for the most part await developed responses from China. C..

The fame of letters written by Jesuit missionaries in China is due largely to the significance of those letters as sources of know..

Exploring the history of art in China from its earliest incarnations to the present day, this comprehensive volume includes two do..

Exploring the history of art in China from its earliest incarnations to the present day, this comprehensive volume includes two do..

Remembering the massacre, Remembering Nanjing: Inclusive Nationalism and the Challenge of the China Dream

The 1937 Nanjing Massacre holds a special place in public memory in China and plays an important role in the Communist Party’s nat..

Department stores and the commodification of culture: artful marketing in a globalizing world

Sartorial Boundaries on the Chinese Frontier

Despite China’s history of shifting territorial borders and the corresponding changes over time in the country’s ethnic compositio..

How new was the New China? This article explores the experience of Beijing tailors in the early years of the PRC in light of this ..

The Quest for Gentility in China: Negotiations Beyond Gender and Class

Barbarian and Chinese: Dress as difference in Chinese art

The Fashionable City? Glimpses of Clothing Culture in Qing Yangzhou

Useless to the state: "Social problems " and social engineering in nationalist Nanjing, 1927-1937

Suzhou: Where the goods of all the provinces converge

Review of Suzhou: where the goods of all the provinces converge by Michael Marmé (Stanford University Press: 2005)

China on the catwalk: Between economic success and nationalist anxiety

Looking for the Jiang Qing dress: Some preliminary findings

In Search of the Jiang Qing Dress: Some Prelimenary Findings

Yangzhou's "mondernity": Fashion and consumption in the early nineteenth century

Yanzhou's 'mondernity': Fashion and consumption in the early nineteenth century

Appetites: Food and Sex in Post-Socialist China. By Judith Farquhar

Yu Feng and the 1950s Dress Reform Campaign: Global Hegemony and Local Agency in the Art of Fashion

The Manchu way: The eight banners and ethnic identity in late imperial China.

A bushel of pearls: Painting for sale in eighteenth-century Yangchow.

A translucent mirror: History and identity in Qing imperial ideology

Far from Where? Jewish Journeys from Shanghai to Australia

What should Chinese women wear? A national problem

A Place in the Nation: Yangzhou and the Idle Talk Controversy of 1934

Whether china has changed or remained the same is a question of remarkable longevity in the field of Chinese studies. It is sustai..

The Origins of Prejudice: The Malintegration of Subei in Late Imperial China

The convention for introducing biography in the Chinese textual tradition is to identify the subject not only by his name but also..

An Asialink blog by Anthony Milner and Jennifer Fang suggests the importance for Australia of joining with its neighbours in full..

Sam Dastyari and the thousands of years of Chinese History

A critical expose of the purposes for which Chinese history is invoked both in China and the West.

The Red Detachment of Women marches forward – but to where?

Not your prom dress: why a Chinese dress set off a cultural debate about identity and history

When a girl in Kansas decided to wear a cheongsam (qipao) to her high school prom, she prompted a turf war over cultural ownership..

Displaying the 4 most recent news articles by Antonia Finnane.

'Not your prom dress': why a Chinese dress set off a cultural debate about identity and history

The Red Detachment of Women marches forward – but to where?

The Woodward Medal in Humanities and Social Sciences

The Joseph Levenson Book Award for a work on pre-1900 China, awarded for Speaking of Yangzhou, A Chinese City, 1550 - 1850, Harvard University Asia Ce