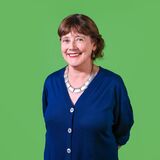 Professor Kerry Murphy is currently Head of Musicology at the Melbourne Conservatorium. She did her undergraduate and postgraduate degrees at the University of Melbourne.

The research for her PhD (1984) “The Formation of the Music Criticism of Hector Berlioz” was done under the supervision of M. François Lesure (Ecole des hautes études, Paris) and Meredith Moon at the University of Melbourne. While studying in Paris (1980-82) she participated in the Musicology seminars run by Lesure at the Ecole des hautes études. Before taking up her lecturing job at the University of Melbourne, she worked as an assistant archivist at the Grainger Museum and lecturer at the Australian Catholic University and the Canberra School of Music. In 1990 she was awarded a Melbourne University Research Fellowship for Women with Career Interruptions, which she shared 0.5 with a lectureship at Melbourne University.Kerry Murphy has attracted substantial external peer reviewed grants (2 ARC large, 4 ARC small) and has convened or co-convened a number of significant conferences, including “Music’s Audience” (2001, keynote Stephen Banfield, Birmingham), the 2002 National conference of the Musicological Society of Australia, an international Symposium on 19th Century French music in 2004, Symposium on Percy Grainger in 2007, Co/Convenor International conference “Worlds to Conquer” University of Bristol, 2010, Wagner and Us Symposium in 2013, and Bach Symposium in 2014. She has served on numerous School, Faculty, and University Committees including Assoc/Dean Research (Faculty, 2006-2009), Director of Research in the Melbourne Conservatorium of Music (2009-2013), B.Mus Standing Committee (2008-2013), Chair, Library Users’ Committee (1992-2009); Research & Postgraduate Studies (1990-2013); Executive (1995-2009); Centre for Studies in Australian Music Management Committee (1997-2006, Chair since 2000), Grainger Museum Advisory Board (1991-1995); Oiseau-Lyre Committee (1992-); Academic Promotion and Confirmation (1995-2014); Faculty Affirmative Action Officer (EOWW) (1998-2009).She is a founding member of the UK Arts and Humanities Research Council Network Francophone Music Criticism 1789-1914, and since 2006 has been an Honorary Associate (and Australian corresponding member) of CHOMBEC (UK) (Centre for the History of Music in Britain, the Empire and the Commonwealth). She has served and continues to serve on a number of Editorial Boards of Australian and European Music journals.Kerry Murphy’s research interests focus chiefly on 19th-century French music and music criticism, and colonial Australian music history. She has a particular interest in opera and in reception studies. She has presented over 60 papers at national and international conferences and also gives numerous public lectures on her research. In both her areas of research, Murphy has built up and fostered postgraduate study, her postgraduates consistently achieve outstanding results. Murphy has been productive in attracting international scholars to the Melbourne Conservatorium of Music (through a number of grant schemes); this has enriched the scholarly and research climate for staff and postgraduate students. In 2008 she was elected a member of the Australian Academy of Humanities.Current research projectsTravelling Virtuosi in 19th-century Australia and New ZealandQuinlan Opera Company Empire tours 1912-1913The representation of Algeria in French 19th-century vocal works.Teaching• 19th-century Music and Ideas• Music Criticism• Studies in Opera• Paris! Berlioz to the Ballets Russes • Music Research • Dissertation• Professional Practice• Postgraduate Seminar (coordinator)

Louise Dyer and Editions de l’Oiseau-Lyre: The Establishment of a Music Press

The Melbourne Ring Cycle is a once in a century celebration

No more asylum in Australia for those arriving by boat: Rudd

Displaying the 44 most recent scholarly works by Kerry Murphy.

Louise Dyer and Editions de l’Oiseau-Lyre: The Establishment of a Music Press

The two day symposium covers the Couperin complete edition (12 vols.; marking the 350th centenary of his birth) and other print pu..

This book is the first to be dedicated to a study of the reception of a major European composer in Australia. Each of the eleven e..

Helen Carr, writing on ‘Modernism and Travel,’ observes that in the period 1880–1940 a ‘remarkable number of novelists and poets w..

Thomas Quinlan and the 'All-Red'Ring: Australia, 1913

Ovide Musin in the Antipodes

The Musical Voyager: Berlioz in Europe

The Musical Voyager: Berlioz in Europe. Ed. by David Charlton and Katharine Ellis. Berlioz: Scenes from the Life and Work. Ed. by Peter Bloom. Music and Letters 91 (2010): 438-441

“Ann Blainey I am Melba.”

Berlioz and Debussy: Sources, Contexts and Legacies: Essays in Honour of François Lesure.

Berlioz and the piano at the Great Exhibition: The challenge of impartiality

This issue of the Nineteenth-Century Music Review is devoted to Australia and more specifically to music-making in colonial Melbou..

Introduction: Choral Concert Life in the Late Nineteenth-Century 'Metropolis of the Southern Hemisphere'

A Liedertafel concert at which the former Governor His Excellency Sir Henry Loch and Lady Loch were present was reported in the Il..

Race and Identity: Appraisals in France of Meyerbeer on his 1891 Centenary

This article examines the ways in which critics and music historians in the Third Republic wrote about Meyerbeer's national and ra..

Berlioz, Meyerbeer, and the place of Jewishness in criticism

Meyerbeer, Judaism and French Music Criticism of the 1830s

Henri Kowalski Prince of the Pianoforte

MAINZER,JOSEPH SACRED AND BEAUTIFUL MISSION, AN ASPECT OF PARISIAN MUSICAL LIFE OF THE 1830S

Displaying the 2 most recent news articles by Kerry Murphy.

The Melbourne Ring Cycle is a once in a century celebration

No more asylum in Australia for those arriving by boat: Rudd