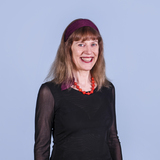 A/Prof Linda Kouvaras is a musicologist, composer and pianist. She holds a continuing position in Music at the Melbourne Conservatorium of Music, the University of Melbourne, and publishes in contemporary music, both classical and popular, focusing especially on Australian music, postmodernism and gender issues in music.

After several years in the late 1970s and early 1980s playing in rock and New Wave/Punk bands and for theatre productions, Linda resumed classical piano studies in the UK in 1984, returning to complete her studies at the Faculty of Music, University of Melbourne, under A/Profs Ronald Farren-Price and Max Cooke, culminating in a Masters Degree in Piano in 1991. Her research work was supervised by Dr Brenton Broadstock, Dr Naomi Cumming, and historian Dr David Goodman and led to her PhD in Musicology in 1996. She has taught in tertiary Music since 1989. Linda Kouvaras's publications appear in all of Australia's musicological journals and in international forums. A substantial Australian Research Council Discovery Project Grant (2005-08), where she was co-Chief Investigator, led to her monograph, https://www.ashgate.com/isbn/9781409441564 (Ashgate, 2013). This book was awarded the Rebecca Coyle Publication Prize in 2014 for the “publication representing popular music in the Australia-New Zealand region in a given year” through the International Association for the Study of Popular Music, Australia / New Zealand. It has also garnered several reviews, all favourable, and has led to invitations for Linda to speak in public forums. Recordings of her works and piano performances appear on Move Records, with the ABC and independent release; they receive frequent radio broadcasts. Her compositions are played at recitals and festivals nationally and internationally. She has full composer representation with APRA-AMCOS and also publishes with Reed Music. Her solo CD is Kouvaras: PianoWorks (Move Records, 2000) and the most recent CD recording to feature her music is The Sky is Melting (Marianne Rothschild, Violin and Glenn Riddle, Piano, on Move Records, 2014). Linda has enjoyed several artist-in-residence stays at Bundanon, the Boyd Estate in NSW, 1999–2010. Linda Kouvaras is resident Academic Coordinator in Music and Performing Arts at Ormond College, the University of Melbourne and has tutored in Music there since 1993. Linda examines in piano for the Australian Music Examinations Board and maintains a select piano teaching studio.Subjects she is currently teaching at the MCM are Music History 3: Impressionism to Present (with A/Prof Michael Christoforidis); Sex, Death and the Ecstatic in Music; Art-Music and Postmodernism; Music as Noise: Making Sound Art; and Music Language 2: Chromaticism and Beyond. She enjoys a vibrant supervisory interaction with her PhD, MMus and Hons Dissertation students across a broad range of research areas, centring on contemporary music and gender issues.

…until it's gone: rhapsody on loss

FUNDRAISER FOR LIDIA THORPE to win NORTHCOTE IN NOVEMBER

From port essington to the himalayas: Music, place and spirituality in two contemporary au..

Displaying the 2 most recent projects by Linda Kouvaras.

Art-music composition in Australia is vibrant and diverse but its relationship with current trends in other art practices has not been well ..

Art-music composition in Australia is vibrant and diverse but its relationship with current trends in other art practices has not been well ..

Displaying the 100 most recent scholarly works by Linda Kouvaras.

This piano duet recording (with fellow pianist performer, Deviani Segal) was made at the behest of Move Records as part of “A spec..

…until it's gone: rhapsody on loss

(Post?-)Feminism, “New Topicality” and the “New Empathy”: Australian Composers Working with the Concrete

From port essington to the himalayas: Music, place and spirituality in two contemporary australian compositions

FUNDRAISER FOR LIDIA THORPE to win NORTHCOTE IN NOVEMBER

These three house concerts were co-curated, with fellow pianist performer, Deviani Segal, to raise funds towards the re-election o..

This piano duet recording (with fellow pianist performer, Deviani Segal) was made at the behest of Move Records as part of “A spec..

Beware the Drop-Bear!: for soprano solo and piano

After Before: Provenance Fantasia

A composition for for piano, violin and clarinet in B-flat.

Beware the Drop-Bear! for SATB choir and piano

The ‘Drop-Bear’ is an Australian urban mythological figure that is used to gently scare tourists to the country, particularly New ..

Music and the Politics of Negation

‘Effing the Ineffable’:1The Work of Susan McClary and Richard Leppert and (Part of) their Legacy

The Lorelei for SSA Choir and Piano

'Effing the Ineffable: The Work of Susan McClary and Richard Leppert and (Part of) Their Legacy'. Review Article

An Elegy for Soprano and Piano

Bundanon Sonata for Violin and Piano

The Annunciation for SATB Choir and Organ

The Sixth Day of Christmas, for SATB Choir

Lysistrata: they are all deserting : for solo violin for SATB Choir

Bundanon Sonata for Violin and Piano

Lysistrata: they are all deserting, for solo violin

Appropriate me (for soprano and piano)

Loading the Silence: Australian Sound Art in the Post-Digital Age

Giving voice to the un-voiced "witch" and the "heart of nothingness": Moya henderson's Lindy

Giving Voice to the Un-voiced “Witch” and the “Heart of Nothingness”: Moya Henderson’s Lindy

Fanfare for Brass and Percussion

The Importance of Music to the Understanding of Interdependence: Connecting through Music

Ballad of the Singleman’s Hut (for oboe and piano)

Lament for Helen (for flute and piano)

Ballad of the Singleman’s Hut (for flute and piano)

Lament for Helen (for oboe and piano)

Toilets, Tears and Transcendence: The Postmodern Place of, and in, two examples of Australian Sound Art

From song cycle, Art and Life, as part of International Women's Day: A celebration of Australian Women composers for Voice and Pia..

Yeah, Yeah, Yeah: All You Need is Beatleology

The sky is melting

KOUVARAS For Esme; (World Premiere), The Sky is Melting

The Psychic "Island of the Sociopath": Nick Cave as Creator-Protagonist in his "Song of Joy"

The Outback in the Himalayas: "Island-esque" Tropes of Identity and Landscape in Australian Composer Stuart Greenbaum's Ice Man

‘Lament for Helen’ from The Bundanon Suite for Piano (by L. Kouvaras) 4 mins ‘Chapel’ and ‘Postlude’ from The Ormond Collection (..

Toilets, Tears and Transcendence: The Postmodern Place of, and in, two examples of Australian Sound Art

Being "In Tune with the Workings of Society": Violence, Maleness, and Two "Touching Little Ballads".

The Edges of Society: Sexual Murder and the "Normal" Male in Nick Cave's "Song of Joy".

Hissing at the Margins: Postmodern Mainstream Positioning in Australian Art-Music and Sound Art’

Conference Proceedings  |  2008  |  STUCK IN THE MIDDLE: The Mainstream and its Discontents

"What’s Fat, Anyway? It’s All in the Mind": Food, Mothering and Fatness in Mike Leigh’s Life is Sweet

From Port Essington to the Himalayas: Music, Place and Spirituality in Two Recent Australian Works

Complete Accord by Miriam Hyde

… to enter the dream which includes all dreams: Four Settings of Texts by Chris Wallace-Crabbe

Modernist and Postmodernist Arts of Noise: Part 2: From the Clifton Hill Mob to CMO's Phobia.

Taking her Breath Away: A Study of Two Pop Songs

Modernist versus postmodernist aesthetics: Contemporary music criticism and the case of Matthew Hindson

CD Liner notes -- 'Secrets of the Amphitheatre', for solo piano

Secrets of the Amphitheatre

Paper given at The 2016 QCRC & QCGU Higher Degree Research Symposium: The Next Generation of Music Research: In & Beyond the Acade..

‘The Restoration of Empathy: A Sound Artwork in Dialogue with Parliament House’.

Paper given at The Centre for the History of Emotions Collaboratory, Practising Emotions: Place and the Public Sphere. Wyselaskie ..

‘Sound Art in the Altermodern’

Paper given at The Annual Conference of the Australasian Association of Literature held in conjunction with the Centre for Moderni..

‘Toilets, Tears and Transcendence: The Postmodern Place of, and in, two examples of Australian Sound Art’.

Paper given at the UTS Transforming Cultures Symposium: Music and the Production of Place, UTS (9 May 2008).

'The Dissonance of Women’s Voices in Australian Political Life: “Not Now, Not Ever! (Gillard Misogyny Speech)”’.

Paper given at The 37th National Conference of the MSA (in conjunction with NZMS). The Charisma of Dissonance. Wyselaskie Auditori..

‘Metamorphosing out of Postmodernism: Sound Art in the Altermodern’.

Joint Conference of the MSA and the NZMS. Music and Metamorphosis: Griffith University, Brisbane (18-22 Nov, 2013)

School of Music, the University of Melbourne Commission
2009

For ‘best student in final year of course’