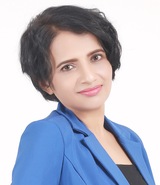 Fundamental and Applied Aspects of IoT Blockchain and Smart Contracts

Dr Malka N. Halgamuge is a Research Fellow / Scientist in the Department of Electrical and Electronic Engineering of University of Melbourne and obtained her PhD from the same department. She is an Adjunct Professor at the Vellore Institute of Technology (VIT) India.

She also a member of the Electromagnetic Radiation Safety Committee, The University of Melbourne, since Sep 2013.

Publications:
She has published more than 110 peer-reviewed publications attracting over 1220 Citations (h-index = 19). Her Research Gate RG Score is 36.25 and SciVal Field-Weighted Citation Impact = 1.1 (2016 - 2019). One of her papers has been selected as a highly cited paper by ISI's Essential Science Indicators (May 2014). She currently co-supervises a PhD student, and she has co-supervised 4 PhD students to the completion (2013, 2015 & 2018) at the University of Melbourne as the Principle Supervisor.

Awards:
Awarded the CAS President's International Fellowship from Chinese Academy of Sciences (CAS), Beijing (2017 & 2018), Incoming Leaders Fellowship from Australia India Institute @ Delhi (2016), Next Step Initiative Fellowship (2015), Australia-China Young Scientist Fellowship (2014), Dyason Fellowship to undertake research at Department of Epidemiology, University of California (UCLA), Los Angeles, USA (2013), Early Career Researcher (ECR) Award (2013) from Alexander von Humboldt Foundation. Two of the papers she has co-authored with her PhD students received the Best Paper Award (2012) and Best Student Paper Award (2011). Awarded the Vice-Chancellor's Engagement Award (2010) and Vice-Chancellor's Knowledge Transfer Award (2008) for her research at the University of Melbourne. She also was awarded the Solander Fellowship (2007 and 2008) for research collaboration with the Departments of Neurosurgery and Radiation Physics, Lund University. She was among the short-listed applicants for both 2009 and 2010 LOreal Australia for Women in Science Fellowship, out of over 200 female scientists applied in Australia.

Research:
Malka's research has few themes: modelling and exploring of

Research Sponsorship For A Phd

Smart Transportation Tracking Systems Based on the Internet of Things Vision

Displaying the 7 most recent projects by Malka Halgamuge.

Research Sponsorship For A Phd

Ucla Visit For The Preparation Of Grants To Fund Research Into The Effects Of Electromagnetic Fields On Human Tissues.

Displaying the 112 most recent scholarly works by Malka Halgamuge.

Magnetic nanoparticle (MNP) based thermal therapies have shown importance in clinical applications. However, it lacks a compromise..

Cryptocurrency has as of late pulled in extensive consideration in the fields of economics, cryptography, and computer science due..

Smart Transportation Tracking Systems Based on the Internet of Things Vision

Security and Privacy of Internet of Medical Things (IoMT) Based Healthcare Applications: A Review

Recent technological advancements have significantly transformed an individual's perception of the traditional way of carrying out..

A Pathirana, Malka Halgamuge, A Syed

In recent years, cryptocurrency such as Bitcoin has attracted much global attention. Bitcoins are produced by mining as a fee for ..

This paper applies Machine Learning (ML) algorithms to peer-reviewed publications in order to discern whether there are consistent..

Due to the constant fluctuation on global currency rates, it is challenging to make predictions on trading in foreign exchange (Fo..

In the big data era, data is made in real-time or closer to real-time. Thus, businesses can utilize this ever-growing volume of da..

Technology has turned into a fundamental piece of everybody's life. Social media technology is already used widely by the public t..

Adoption of the Internet of Things (IoT) in Agriculture and Smart Farming towards Urban Greening: A Review

It is essential to increase the productivity of agricultural and farming processes to improve yields and cost-effectiveness with n..

In this chapter, the authors performed an analysis of the data extracted from 39 peer-reviewed scientific publications between 201..

Cognitive radio technology (CRNs) will be the fundamental driving force behind the next generation (5G) mobile communication syste..

Critical Issues in the Invasion of the Internet of Things (IoT): Security, Privacy, and Other Vulnerabilities

In this chapter, the authors collected data from issues related to threats in the applications of IoT-based technologies that desc..

Numerous organizations are using aspects of the cloud to store data, but as sensitive data is placed on the cloud, privacy and sec..

New Era in the Supply Chain Management with Blockchain: A Survey

The results show that transparency and auditability, security and indelibility, and distribution and sustainability are the key at..

The Internet of Things (IoT) in health care is an emerging trend which provides a substantial amount of efficient and effective se..

Comparison Study of Applications of IoT in Health Care: Data Security in Telemedicine

Internet of Things (IoT) is the backbone of telemedicine and its data security has become a significant concern that requires furt..

A Review on Cyberattacks

Research questions remain to be answered in terms of discovering how security could be provided for different resources, such as d..

Measurement and analysis of power-frequency magnetic fields in residences: Results from a pilot study

Review: Security and Privacy Issues of Fog Computing for the Internet of Things (IoT)

Internet of Things (IoT), devices, and remote data centers need to connect. The purpose of fog is to reduce the amount of data tra..

This study performed a content analysis of data retrieved from 30 peer-reviewed scientific publications (1996–2016) that describe ..

A Review on Security and Privacy Challenges of Big Data

Review: Security and Privacy Issues of Fog Computing for the Internet of Things (IoT)

Other  |  2018  |  COGNITIVE COMPUTING FOR BIG DATA SYSTEMS OVER IOT: FRAMEWORKS, TOOLS AND APPLICATIONS

Despite the recent increase in the utilisation of the tools of “Big Data” and “Business Intelligence” (BI), the investigation that..

The use and analysis of anti-plagiarism software: Turnitin tool for formative assessment and feedback

Review: An evaluation of major threats in cloud computing associated with big data

Big-data NoSQL databases: A comparison and analysis of 'Big-Table', 'DynamoDB', and 'Cassandra'

Analysis of large flood events: Based on flood data during 1985-2016 in Australia and India

Editorial Note: Empirical Multimedia Service and its Applications for IoT

Cloud computing has shifted our old documents up into the clouds, with the advancement of technology. Fast-growing virtual documen..

Big-Data NoSQL Databases: A Comparison and Analysis of "Big-Table", "DynamoDB", and "Cassandra"

Journal article  |  2016  |  Physica A: Statistical Mechanics and its Applications

Natural Disasters, When Will They Reach Me?

This book shows that state transitions of many such systems translate into random walks on their respective state spaces, biased a..

Abstract This research proposes A THEORETICAL FRAMEWORK based on model predictive control (MPC) for irrigation control to minimize..

© 2015 Elsevier B.V. In model-based irrigation control, the root zone soil moisture deficit (RZSMD) is maintained based on the wat..

Conference Proceedings  |  2013  |  Proceedings of the 4th IFAC Conference on Modelling and Control in Agriculture, Horticulture and Post Harvest Industry

A Computationally Efficient Framework for Stochastic Prediction of Flood Propagation

Measurement and analysis of electromagnetic fields from trams, trains and hybrid cars

An estimation of sensor energy consumption

An incremental approach to model based clustering and segmentation

SMIEEE - Senior Member of the Institution of Radio and Electronic Engineers, Australia