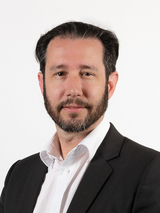 Dr Guillermo Narsilio is an Australian Research Council (ARC) Future Fellow (and Associate Professor), and a member of the ARC College of Experts, in the Department of Infrastructure Engineering at The University of Melbourne.

He obtained his Diploma in Civil Engineering from the National University of Cordoba (Argentina) in 2001. He is the first and only Australian to have received the ISSMGE Outstanding Young Geotechnical Engineer Award, an honour given only every 4 years by the International Society of Soil Mechanics and Geotechnical Engineering (ISSMGE) among geotechnical engineers and researchers worldwide. He co-authored a keynote paper with his former supervisor Prof Carlos Santamarina, considered one of the world's top geotechnical researchers, and another keynote paper with Prof Ian Johnston, well recognised in Australasia and the world. Narsilio did his postdoctoral experience at The University of Melbourne, guided by Prof David Smith, he became a Lecturer at the Melbourne School of Engineering in 2009, a Senior Lecturer in 2011, and he is now an Associate Professor. Narsilio has made important contributions to methane hydrates bearing sediments physical characterisation (this work was lead by Prof Santamarina, Prof Ruppel and Asst/Prof Yun, and has high impact in methane hydrates behaviour and extraction modelling, to use methane hydrates as an alternative energy source); multi-scale hydro-thermal conduction and diffusion geo-phenomena; and theoretical and numerical investigations of the chemo-mechanical properties of electrically charged porous materials (clays, shales, etc). In 2009, Narsilio was awarded (i) a Australian Postdoctoral Award (APD), by the ARC; and (ii) the inaugural Jack Morgan Award for outstanding contributions by a young geotechnical engineer to geomechanics in Victoria, by the Australian Geomechanics Society. Dr Narsilio's research interests include numerical modelling, multi-scale porous material characterisation and performance and the (sustainable) energy industry. He and a group of researchers at the Melbourne Energy Institute (Prof Ian Johnston, A/Prof Lu Aye, among others) are pursuing further research on basic and applied shallow and deep geothermal energy systems.

Quantifying the impact of rigid interparticle structures on heat transfer in granular mate..

Displaying the 40 most recent projects by Guillermo Narsilio.

This project aims to investigate the extraction of renewable energy from new pavements constructed with low-carbon recycled demolition waste..

This project aims to investigate the extraction of renewable energy from new pavements constructed with low-carbon recycled demolition waste..

Hybrid Geothermal Heating And Cooling For An Australian School

A Novel Application Of Recycled Glass In Lightweight Concrete

Control The Grid Or Be Controlled: Near Off-Grid Solutions Using Renewable Energy Technologies And Demand Side Prediction

To mitigate the impacts of climate change, the demand for renewable energy technologies with low greenhouse gas (GHG) emissions is rapidly b..

To mitigate the impacts of climate change, the demand for renewable energy technologies with low greenhouse gas (GHG) emissions is rapidly b..

The X-ray Microscopy Facility for Imaging Geo-Materials (XMFIG) will allow the investigation, with near-synchrotron capabilities, of the thr..

The biggest threat facing life now is climate change due to carbon dioxide (CO2) emissions. Extreme weathers are increasing in frequency and..

Displaying the 109 most recent scholarly works by Guillermo Narsilio.

Existing definitions of where and why preferential flow in porous media occurs, or will occur, assume a priori knowledge of the fl..

Porosity-dependent models can be used to predict the effective thermal conductivity (ETC) of particulate materials. However, they ..

Coordination number can be used to quantify the particle connectivity and deformability of a granular material. However, it is a l..

Knowledge of particle morphology is vital to understand the behaviour of natural geomaterials including heat transfer. The effects..

Cost Effectiveness of Energy Piles in Residential Dwellings in Australia

Soil water content is an important parameter in many engineering, agricultural and environmental applications. In practice, there ..

The dielectric constant of soil is used to estimate its water content in a range of applications. Unlike the widely known effect o..

Journal article  |  2018  |  Geomechanics for Energy and the Environment

Optimisation of a hybrid geothermal-solar-gas system: A case study for a typical poultry shed in New South Wales, Australia

Poultry sheds are used to raise poultries (chickens, turkeys and ducks), and have a unique heating and cooling demand pattern. A s..

Performance of a new driven battered micropiles system in sand

Use of Permeable Paving Systems (PPS) in road transport networks has been gaining more attention due to benefits such as minimisin..

Discussion of "Fines Classification Based on Sensitivity to Pore-Fluid Chemistry" by Junbong Jang and J. Carlos Santamarina

Heating and cooling loads of a poultry shed in Central Coast, NSW, Australia

Journal article  |  2017  |  Geomechanics for Energy and the Environment

Salient comments from an expert panel on energy geotechnics

Physical characterisation of soils recovered from the ANZAC battlefield

© The Authors, published by EDP Sciences, 2017. A perennial challenge for the characterization and modelling of phenomena involvin..

Numerical and experimental investigation of geothermal integration into tunnels

© The Authors, published by EDP Sciences, 2017. Grain breakage is of paramount importance for understanding the behaviour of granu..

Machine learning framework for analysis of transport through complex networks in porous, granular media: A focus on permeability

Uncertainties in the design of ground heat exchangers

Journal article  |  2016  |  Geomechanics for Energy and the Environment

An investigation of the potential thermal energy of geothermal tunnels with focus on a case study in Stuttgart, Germany

Characterisation of conduction phenomena in soils at the particle-scale: Finite element analyses in conjunction with synthetic 3D imaging

Hydraulic and thermal conduction phenomena in soils at the particle-scale: Towards realistic FEM simulations

Hydrocephalus: A Realistic Porous-Media Model with Geometry Based on Neuroimaging

Using numerical model to predict hydrocephalus based on MRI images

Physical characterization of core samples recovered from Gulf of Mexico

Displaying the 2 most recent news articles by Guillermo Narsilio.

Given by the International Society of Soil Mechanics and Geotechnical Engineering (ISSMGE), once every 4 years.

Outstanding contribution by a young geotechnical practitioner to geomechanics in Victoria.

International Association for Computer Methods and Advances in Geomechanics (IACMAG)