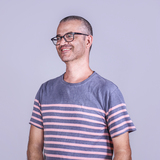 Raimondo Cortese graduated from VCA School of Drama in 1993. He was a founding member of Ranters Theatre, serving as Artistic Director from 1994 - 2001.

Ranters have been regularly programmed in international performing arts festivals and venues since 1999, including developments and residencies. He has written over thirty plays and texts for theatre, which have been performed in over a dozen countries, including Features of Blown Youth, Roulette, St Kilda Tales and The Wall. His most recent works are, Holiday, which won a 2007 Green Room Award for Best Australian Writing, The Dream Life of Butterflies for MTC and Intimacy, which premiered at the Malthouse Theatre for the 2010 Melbourne International Festival of the Arts. He was the recipient of a 2010 Australian Leadership Award, and was awarded the inaugural Patrick White Fellowship by the STC in 2011. His most recent work was Buried City, an Urban Theatre Projects, Belvoir St, 2012 Sydney Festival co-production and Murder, for Erth and the 2013 Sydney & Adelaide Festivals and Ten Days on the Island. He has also written for film - The Boy Castaways, television and radio, as well as visual and experimental texts. His fiction includes a collection of short stories - The Indestructible Corpse (Text Publishing 1998). He teaches script writing master classes both here and overseas, and is a lecturer in Master of Writing for Performance in Theatre, VCA School of Performing Arts, Melbourne University.

RANTERS : REHEARSAL AND DEVELOPMENT PROCESS - HOW IS THE TEXT EN ACTED?

Theatre of the Everyday

Hyperrealism and the Everyday: The Plays of Ranters Theatre

Come Away With Me to the End of The World

Displaying the 27 most recent scholarly works by Raimondo Cortese.

Those with plenty of time and little else. Into a shared house of urban twenty-somethings including a student, a stripper, a wann..

RANTERS : REHEARSAL AND DEVELOPMENT PROCESS - HOW IS THE TEXT EN ACTED?

Theatre of the Everyday

Hyperrealism and the Everyday: The Plays of Ranters Theatre

Come Away With Me to the End of The World

Writing for Ranters – A Theatre of the Everyday.

The Dream Life of Butterflies (novel)

yet to ascertain the nature of the crime