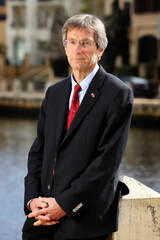 He is Associate Professor in the Nossal Institute for Global Health in the School of Population and Global Health, University of Melbourne. Dr Ruff has since 2012 been a co-president of International Physicians for the Prevention of Nuclear War (IPPNW, Nobel Peace Laureate 1985), and has previously served as Asia-Pacific Vice-President, Boston-based Consultant on Policy and Programs, and Board member. He is a co-founder and was founding international and Australian chair of the International Campaign to Abolish Nuclear Weapons (ICAN), and serves on the Committee of ICAN Australia. ICAN was awarded the 2017 Nobel Peace Prize “... for its work to draw attention to the catastrophic humanitarian consequences of any use of nuclear weapons and for its ground-breaking efforts to achieve a treaty-based prohibition of such weapons". ICAN is the first Australian-born Nobel Peace Laureate.Dr Ruff has been active in the Medical Association for Prevention of War (Australia) since 1982 and is a past national president. He was one of two civil society advisors to the International Commission on Nuclear Non-proliferation and Disarmament, the first civil society representative on Australian nuclear Non-Proliferation Treaty delegations, and a civil society delegate to the landmark intergovernmental Conferences on the Humanitarian Impact of Nuclear Weapons in Norway, Mexico and Austria (2013-14). In 2017, he led the IPPNW delegation in New York through the negotiation of the historic United Nations Treaty on the Prohibition of Nuclear Weapons.

Dr Ruff has clinical interests in immunisation and travel medicine, and was the inaugural head of travel medicine at Fairfield Hospital and then Royal Melbourne Hospital. He served as Australian Red Cross international medical advisor from 1996 to 2019. He was the first to document links between outbreaks of ciguatera fish poisoning and nuclear testing in the Pacific. Dr Ruff worked on hepatitis B control and maternal and child health in Indonesia and Pacific island countries with the Australian and NZ government aid programs, Burnet Institute, UNICEF and WHO. He spent five years as regional medical director for an international vaccine manufacturer, and was a foundation member of the World Health Organisation Western Pacific Region Hepatitis B Immunisation Expert Resource Panel (2010-19).

In June 2012, Dr Ruff was appointed a Member of the Order of Australia "for service to the promotion of peace as an advocate for the abolition of nuclear weapons, and to public health through the promotion of immunisation programs in the South-East Asia - Pacific region". In 2019, he was appointed an Officer of the Order of Australia (AO) “For distinguished service to the global community as an advocate for nuclear non-proliferation and disarmament, and to medicine.”

Displaying the 66 most recent scholarly works by Tilman Ruff.

WHO must remain a strong global health leader post Ebola.

Introduction to the special issue: Nuclear power in East Asia

A Public Health Perspective on the Fukushima Nuclear Disaster

A vaccine against tick-borne encephalitis is available in Australia.

Getting nuclear-bomb fuel out of radiopharmaceuticals

From Hiroshima and Nagasaki towards a world without nuclear weapons

Proliferation dangers associated with nuclear medicine: getting weapons-grade uranium out of radiopharmaceutical production.

Implementing the birth dose of hepatitis B vaccine in rural Indonesia

A call for publishers to declare their conflicts of interest

An illusion of protection: the unavoidable limitations of safeguards on nuclear materials and the export of uranium to China

Although most naturally occurring infections with anthrax and plague are cutaneous, both organisms are most likely to be deliberat..

A diphtheria-tetanus-acellular pertussis vaccine for adults: the wrong booster vaccine for Australia?

The effectiveness of the infant hepatitis B immunisation program in Fiji, Kiribati, Tonga and Vanuatu.

The aims of this project were: (1) to determine the extent to which infant hepatitis B immunisation is preventing chronic hepatiti..

At-birth immunisation against hepatitis B using a novel pre-filled immunisation device stored outside the cold chain.

We evaluated the immunogenicity of hepatitis B (HB) vaccine in UniJect, a pre-filled, non-reusable injection device, stored at tro..

In just under a quarter of a century, the Expanded Programme on Immunisation has been associated with an increase in infant immuni..

Malaria. The latest in advice for travellers.

The combined hepatitis A and B vaccine: Who should received it?

Hepatitis B immunisation coverage of infants born to chronic carrier mothers in Victoria.

Hepatitis B immunisation rates among infants in ethnic groups with high prevalences of hepatitis B surface antigen carriers.

To determine hepatitis B immunisation rates in infants from ethnic groups with hepatitis B surface antigen chronic carrier prevale..

Many HIV-infected people travel abroad, and although most can travel in relative safety there are a range of issues and risks to b..

Hepatitis B Vaccination: What Are the Current International Recommendations?

Japanese B encephalitis vaccine. Time for a reappraisal?

International travel is an integral and increasing part of modern life. Travel-related illness is common, diverse and associated w..

The volume of international travel and diversity of destinations have increased dramatically in recent decades and continue to gro..

Hepatitis in the tropics.

Viral hepatitis, caused by one of five different viruses, is an important cause of illness in tropical countries and a significant..

Viral hepatitis is one of the more common potentially serious infections that may be acquired during international travel. Clinica..

Ciguatera and mannitol: experience with a new treatment regimen.

Ciguatera is a distressing, hitherto-untreatable and not rare disease which results from the eating of ciguatoxin-contaminated fis..

Ciguatera in the Pacific: a link with military activities.

Ciguatera fish poisoning is widespread in the Pacific. Outbreaks and the rise in incidence of the disease are related largely to m..

Healing our planet: a global prescription.

Displaying the 10 most recent news articles by Tilman Ruff.

Australia must sign the prohibition on nuclear weapons: here's why

As the world pushes for a ban on nuclear weapons, Australia votes to stay on the wrong side of history

Fukushima: The misery piles up

We need one law for all

If we can't stop an impoverished nation like North Korea making nuclear weapons, our tactics are clearly wrong

Ban the bomb: 70 years on, the nuclear threat looms as large as ever

FRACP - Fellow of the Royal Australasian College of Physicians