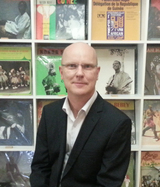 Dr Graeme Counsel is an Honorary Fellow of the University of Melbourne and holds positions in the Faculty of Arts, the Faculty of Fine Arts and Music, and Student and Scholarly Services. His research projects and publications examine the nexus of popular music and politics, drawing from the disciplines of Ethnomusicology and Cultural Studies.

His research interests encompass African, trans-Atlantic and Asiatic cultures, and focus on music, culture and society in Africa.

Dr Counsel's post-doctoral research includes over two years’ fieldwork in West Africa. From 2008 to 2013 he received three Major Research Project Awards through the Endangered Archives Programme. This funding enabled the collection, preservation and archiving of the Republic of Guinea’s national sound archive, a collection of over 7,500 songs recorded during Guinea's 1st Republic (1958-1984). One of the largest digital collections of African music in the world, his archival project included the complete catalogue of the Syliphone recording label, the flagship of the Guinean recording industry. Following its completion, the Endangered Archive Programme partnered with the British Library, the Bureau Guineen du Droit d'Auteur, and Sterns Music to enable his complete archival collection to be available to the public via the British Library Sounds website.

Dr Counsel’s digital archive projects were conducted with the cooperation of Guinea’s Ministry of Culture et Patrimonie, Ministry of Communication, and Ministry of Tourism, and were exhibited at the National Museum in Conakry as part of Guinea's 50th anniversary of independence celebrations. In recognition of his research and contribution to the preservation of national culture, the Guinean government awarded him their highest research honour, the gold medal of the Palme Academique en Or. He was the first non-African to receive this award.

The British Library, the Bibliotheque Nationale de Guinee and the archives of Radio Television Guinee hold his archival collections, and Dr Counsel has presented his research projects in a wide variety of fora. He was invited to present at the first international symposium on African popular music: “Revisiter l'histoire des musiques modernes d'Afrique: Retour aux sources”, held in Bamako, Mali. He has presented papers for numerous African Studies conferences and has lectured subjects on African music, World music, Ethnomusicology and Cultural Studies in the Faculty of Arts and the Faculty of Fine Arts and Music. He has conducted research in Africa with the National Council for Arts and Culture in The Gambia, The West African Research Center in Senegal and The Direction Nationale de la Culture in Mali. In addition to his publications, Dr Counsel has compiled five double-volume compact discs of Guinean music, with Folk Roots magazine naming his compilation, “Authenticite - The Syliphone years. Guinea's Orchestres Nationaux and Federaux 1965-1980”, as the best packaged album of the year. He has also compiled the first discographies of the shellac and vinyl recording output of the nations of Guinea, Mali, The Gambia, Burkina Faso, Guinea Bissau and Mauritania, and constructed the first discographies of many early West African recording labels. In Australia he has presented African music programmes on public radio and provided commentary for the BBC, ABC, SBS, and African television, radio and print media.

Music for a revolution: The sound archives of Radio Télévision Guinée

Music for a coup: Armee Guinneene. An overview of Guinea's recent political turmoil

Digital archives in Africa and the Endangered Archives Programme

Displaying the 58 most recent scholarly works by Graeme Counsel.

Digital archives in Africa and the Endangered Archives Programme

Including both long chapters and shorter case studies, this volume brings to life the vital discourse between academia and new pra..

Guinea, Republic of: History, Culture, and Geography of Music

Bloomsbury Encyclopedia of Popular Music of the World

Wide-ranging in scope, the book is an excellent introduction for students and scholars working in musicology, ethnomusicology, pop..

Sex, drugs and female agency: Why Siramori Diabaté’s song 'Nanyuman' was such a success in Mali and Guinea

This is a must-read how-to guide if you are planning to embark on a scholarly digitisation project.

Taking an innovative and interdisciplinary approach, this volume explores the idea of sharing as a model to construct and dissemin..

A guide to The Syliphone Archive

Music for a revolution: The sound archives of Radio Télévision Guinée

This volume celebrates the tenth anniversary of the Endangered Archives Programme at the British Library, established to document ..

The music archives of Guinea. Nationalism and its representation under Sékou Touré.

Conserving the Archives of a National Broadcaster in Africa

Discography of the L.G.V.D. recording label

Stirring the pot: A history of African cuisine, by Peter McCann

Syliphone: The elephant that will not die. Guinean music on the Syliphone recording label

Discography of the N'dardisc recording label

The N'Dardisc label was one of the first commercial recording labels dedicated to West African music, predating Syliphone and Safi..

A discography of the Burkinabé "Volta Discobel" recording label.

A discography of one of West Africa's earliest and largest recording labels, "Safie Deen", based in Abidjan, Côte d'Ivoire.

Music for a coup: Armee Guinneene. An overview of Guinea's recent political turmoil

Archival research in West Africa can present many challenges. In one of the poorest regions of the world, governments struggle to ..

This discography presents vinyl recordings (78, 45 and 33.3 rpm discs) produced in The Gambia and/or which feature Gambian musicia..

The search for Authenticité in a global age: Artists and arts policy in Francophone West Africa

Authenticité was a cultural movement which gained wide currency in Africa during the post-independence period of the 1960s and 197..

Conflict and collusion in Sierra Leone, by David Keen

Directory of Africanists in Australasia and the Pacific

Sunjata. A West African Epic of the Mande People, by David C. Conrad

This discography presents vinyl recordings (78, 45 and 33.3 rpm discs) produced in Mali and/or which feature Malian musicians.

Eurafricans in Western Africa. Commerce, social status, gender, and religious observance from the sixteenth to the eighteenth century, by George E. Brooks

A critique of cultural policy in Mali with the return of the Semaine National des Arts et de la Culture.

A full discography of the Malian "Mali Kunkan" recording label

Discography of the Syliphone recording label

The Syliphone recording label was the flagship of the recording industry in Guinea during the 1st republic (1958 - 1984). The labe..

A complete discography of the recordings of Bembeya Jazz National.

The Routledge Companion to Popular Music History and Heritage

Displaying the most recent news article by Graeme Counsel.

Faculty of Arts, University of Melbourne

International Association for the Study of Popular Music

International Editorial Board for the The Australasian Review of African Studies

African Studies Association of Australasia and the Pacific

Bachelor of Arts with Honours