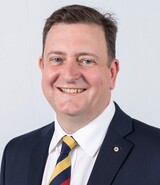 Michael C. Reade commenced his appointment as the Australian Defence Force (ADF) Professor of Military Medicine and Surgery in late 2011. An anaesthetist and intensive care physician, he holds a clinical appointment at the Royal Brisbane and Women's Hospital and military appointments at the ADF's Joint Health Command and as the Director of Clinical Services at the Australian Regular Army's only field hospital.

After clinical training in anaesthetics and intensive care medicine in Sydney, Melbourne, Oxford and Pittsburgh, a doctorate in the molecular pathogenesis of nitric oxide production in human septic shock from the University of Oxford and a postdoctoral research fellowship in clinical trials and epidemiology from the University of Pittsburgh, Michael returned to Australia as Associate Professor of Intensive Care Medicine at the Austin Hospital and the University of Melbourne in 2007. There, he developed a clinical research programme focused on ICU sedation and delirium. He was the chief investigator in a 15-hospital clinical trial that demonstrated the effectiveness of dexmedetomidine, compared to placebo, as a treatment for ICU delirium. He remains a principal investigator in several programmes testing new approaches to sedation in intensive care.
Michael has held faculty appointments at the University of Oxford (where he taught physiology), the University of Pittsburgh (where he was an Instructor in critical care), and currently the Universities of Melbourne, London and Queensland, along with Monash University. He has supervised postgraduate students in basic and applied research, and is a Fellow of the Higher Education Academy of the United Kingdom.

Michael was commissioned as a General Service Officer in the Australian Army in 1990, and currently holds the rank of Brigadier. In November 2011, after 22 years service including deployments to the Balkans, Timor, the Solomon Islands and Afghanistan, he was appointed the inaugural ADF Chair in Military Medicine and Surgery. Having been Director of Clinical Services of the Australian Regular Army's only field hospital from 2015-2018, he is now the Director General Health Reserve - Army. He leads a research programme at the interface of civilian and military trauma medicine, including management of acute cognitive impairment, traumatic coagulopathy, blood transfusion and trauma systems design, in collaboration with the ANZICS Clinical Trials Group, the Australian Red Cross Blood Service, the Queensland Health Jamieson Trauma Institute and colleagues in the UQ Burns, Trauma and Critical Care Research Centre.

Over view of major traumatic injury in Australia--Implications for trauma system design.

Delirium: one size does not fit all.

Displaying the 71 most recent scholarly works by Michael Reade.

Over view of major traumatic injury in Australia--Implications for trauma system design.

BACKGROUND: Trauma registries are known to drive improvements and optimise trauma systems worldwide. This is the first reported co..

Delirium: one size does not fit all.

BACKGROUND: Cryopreservation extends platelet (PLT) shelf life from 5 to 7 days to 2 to 4 years. However, only 73 patients have be..

BACKGROUND: Dexmedetomidine produces sedation while maintaining a degree of arousability and may reduce the duration of mechanical..

Cryopreserved Platelets for Surgical Bleeding: Protocol for the CLIP-II Trial Based on CLIP-I Pilot Data

Cultural influences on the rates, acceptability and utility of advance care directives

Does dexmedetomidine given as a premedication or intraoperatively reduce post-hospitalisation behaviour change in children? A study protocol for a randomised controlled trial in a tertiary paediatric hospital

Do austere surgical units belong on a mature battlefield? A critique of the evidence

Haemotherapy algorithm for the management of trauma-induced coagulopathy: an Australian perspective

A systematic review and meta-analysis of early goal-directed therapy for septic shock: the ARISE, ProCESS and ProMISe Investigators

Delirium diagnosis: The importance of communication

Diagnosis of delirium: importance of context and duration of observation IN Reply

Variability in adequacy of ventilation during transport of cardiac surgery patients: a cohort study

Surgery for blast injuries: experience of an Australian surgical team in Afghanistan

Arterial hyperoxia and in-hospital mortality after resuscitation from cardiac arrest

Do hospitals provide lower quality of care to black patients for pneumonia?

Why we should be wary of single-center trials

Should we question if something works just because we don't know how it works?

Prevalence and Significance of Coagulation Abnormalities in Community-Acquired Pneumonia

Late-onset ornithine transcarbamylase deficiency: a potentially fatal yet treatable cause of coma

Is reducing variability of blood glucose the real but hidden target of intensive insulin therapy?

The pursuit of a high central venous oxygen saturation in sepsis: growing concerns

Bench-to-bedside review: The evaluation of complex interventions in critical care

The case for dobutamine

FCCP - Fellow of the College of Chest Physicians

FJFICM - Fellow of the Joint Faculty of Intensive Care Medicine

FANZCA - Fellow of the Australian and NZ College of Anaesthetists