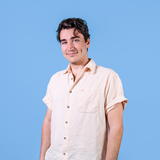 Dr Reuben Brown (PhD Ethnomusicology, University of Sydney) is Postdoctoral Fellow at the Faculty of Fine Arts and Music, and a Research Affiliate with the ARC Centre of Excellence for the Dynamics of Language.

Reuben has collaborated with Indigenous Australian ceremony leaders and artists as well as anthropologists, linguists, historians and musicologists to document living song traditions such as kun-borrk/manyardi, wangga, thabi and junba from the north of Australia, and to support the vitality and revitalisation of Indigenous Australian song more broadly.

For his PhD thesis titled: ‘Following footsteps: the kun-borrk/manyardi song tradition and its role in western Arnhem Land society’, Reuben collaborated with ceremony leaders from the communities of Gunbalanya and Warruwi in the Northern Territory to return archival recordings from the 1948 American Australian Expedition to Arnhem Land, and document 15 contemporary song repertories from the Top End region, analysing their significance as part of funeral and reburial ceremonies, exchange ceremonies, cultural festivals, and informal events involving visitors.

Reuben’s research for the ARC project ‘Hearing Histories of the Western Pilbara’ also involves playing back digital collections of archival recordings of thabi songs to custodians living in the Pilbara region of Western Australia, and documenting local Indigenous understandings of these songs in their own languages and social and historical context.

Reuben lectures on Indigenous Australian song with Wilin Centre colleague Tiriki Onus, and collaborates with linguists and musicologists affiliated with the Centre of Excellence in the Dynamics of Language on research into western Arnhem Land language and song. Reuben continues to learn Kunwinjku and Mawng, and has been invited to perform kun-borrk/manyardi, wangga and junba with singers from western Arnhem Land as part of Mamurrng (exchange ceremonies) in the Top End, and in conference settings where he has co-presented with collaborators on aspects of Indigenous Australian song.

Diplomacies of Practice: Workshop-on-Country and Symposium and Sharing of Indigenous Cultu..

Dialogues with the Archives: Arrarrkpi Responses to Recordings as Part of the Living Song ..

Displaying the 2 most recent projects by Reuben Brown.

Displaying the 9 most recent scholarly works by Reuben Brown.

Diplomacies of Practice: Workshop-on-Country and Symposium and Sharing of Indigenous Cultural Practice

Dialogues with the Archives: Arrarrkpi Responses to Recordings as Part of the Living Song Tradition of Manyardi

This article explores the role of legacy recordings of song for a family of Arrarrkpi (Mawng-speaking people), who are contemporar..

A Different Mode of Exchange: the Mamurrng Ceremony of Western Arnhem Land

In this article, I describe the unique set of circumstances that led to me becoming the recipient and focus of a Mamurrng ceremony..

Relational Returns: Relationships and the Repatriation of Legacy Song Recordings in Australia

In this article we focus on how repatriation is perceived, enacted and understood by custodians of living performance traditions i..

When songs are performed in socially meaningful and memorable contexts, they can act as vehicles that carry aspects of an individu..

The Role of Songs in Connecting the Living and the Dead: A Funeral Ceremony for Nakodjok in Western Arnhem Land

Displaying the most recent news article by Reuben Brown.

The University of Sydney
2011

The University of Sydney

Member, Ictm Study Group On Music And Dance Of Oceania