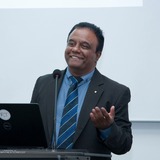 Prof Saman Halgamuge is a Fellow of IEEE, a Professor in the Department of Mechanical Engineering of School of Electrical, Mechanical and Infrastructure Engineering and a Distinguished Speaker/Lecturer of IEEE Computational Intelligence Society (2019-2O21).
He has previously served as Director/Head, Research School of Engineering of the Australian National University (ANU) (2016-18) and as a member of Australian Research Council (ARC) College of Experts for Engineering, Information and Computing Sciences (2016-18).

Bioinformatics Pipelines for Targeted Resequencing and Whole-Exome Sequencing of Human and..

Displaying the 37 most recent projects by Saman Halgamuge.

We want to dissect the machinery underlying how each and every individual stem and progenitor cell generates the different blood cell types...

Control The Grid Or Be Controlled: Near Off-Grid Solutions Using Renewable Energy Technologies And Demand Side Prediction

Without the capability to identify and study the vast majority of extant viruses using traditional laboratory techniques, emerging threats t..

Without the capability to identify and study the vast majority of extant viruses using traditional laboratory techniques, emerging threats t..

Trigen: A Holistic Approach For Optimised Usage Of Heating, Cooling And Electricity For Bulk Energy Users.

This project aims to predict the unknown class labels using the existing small number of class labels. The outcomes of the project have dire..

With the recent advances in sequencing technology, the amount of biological sequence data available has increased tremendously. Extraction o..

The infrastructure developed will be of national /international significance, given the rapid emergence of wireless sensor networks. This in..

Sequence data analysis is about extracting information included in sequences of data in which the order of sequence matters. The project aim..

The project aims to investigate the application of advanced control and estimation techniques (robust nonlinear and soft-computing approache..

Gait Recognition Approaches To The Diagnosis Of Cerebral Palsy

This project will set up a virtual organization for tsunami related data analysis using grid technology. Due to geologically remote areas/co..

Displaying the 437 most recent scholarly works by Saman Halgamuge.

ENVirT: inference of ecological characteristics of viruses from metagenomic data

Background: Estimating the parameters that describe the ecology of viruses,particularly those that are novel, can be made possible..

Generative adversarial nets (GANs) are widely used to learn the data sampling process and their performance may heavily depend on ..

Similarity of Continuous Optimization Problems from the Algorithm Performance Perspective

Comprehensive Insights Into Composition, Metabolic Potentials, and Interactions Among Archaeal, Bacterial, and Viral Assemblages in Meromictic Lake Shunet in Siberia

The Value of Flexible Road Designs Through Ecologically Sensitive Areas

CoMet: a workflow using contig coverage and composition for binning a metagenomic sample with high precision

A Review on efficient thermal management of air- and liquid-cooled data centers: From chip to the cooling system

Positive-Unlabeled Learning for inferring drug interactions based on heterogeneous attributes

The Importance of Temporal Resolution in Evaluating Residential Energy Storage

A Multiple Regression Approach to Normalization of Spatiotemporal Gait Features

Accounting for Forecast Uncertainty in the Optimized Operation of Energy Storage

Neuromechatronics with In Vitro Microelectrode Arrays

Background Mass Spectrometry (MS) is a ubiquitous analytical tool in biological research and is used to measure the mass-to-charge..

Attributing Conversion Credit in an Online Environment: An Analysis and Classification

The effects of an ankle foot orthosis on cerebral palsy gait: A multiple regression analysis

© 2015 IEEE. The aim of this study was twofold. Firstly, to develop a multiple regression normalization (MR) strategy to decorrela..

Algorithm selection for black-box continuous optimization problems: A survey on methods and challenges

© 2015 ACM. Cooperative co-evolution is a framework that can be used to effectively solve large scale optimization problems. This ..

Bioinformatics Pipelines for Targeted Resequencing and Whole-Exome Sequencing of Human and Mouse Genomes: A Virtual Appliance Approach for Instant Deployment

CD Wijetunge, I Saeed, SK Halgamuge, B Boughton, U Roessner

The algorithm selection problem on the continuous optimization domain

On the task specific evaluation and optimisation of cable-driven manipulators

Can a Data Center Heat-Flow Model be Scaled Down?

The oligonucleotide frequency derived error gradient and its application to the binning of metagenome fragments.

BACKGROUND: The characterisation, or binning, of metagenome fragments is an important first step to further downstream analysis of..

The Rationale Behind Seeking Inspiration from Nature

BACKGROUND: Accurate identification of splice sites in DNA sequences plays a key role in the prediction of gene structure in eukar..

A comparative study of manufacturing practices and performance variables

Empirical relationships between some manufacturing practices and performance

Polynomial kernel adaptation and extensions to the SVM classifier learning

Message from the conference chairs

Gene function prediction based on genomic context clustering and discriminative learning: an application to bacteriophages.

Evolution by communication: a revision of sperm-mediated gene transfer

Articulatory reproduction of voices of hearing-impaired by a talking robot

3D environment modeling and its application to human robot interaction

Multi-layered networks for visualizing the interactions between heterogeneous proteins

Resonant recognition model for prediction of 'lead-in regions' in proteins

Gene function prediction based on genomic context clustering and discriminative learning: an application to bacteriophages

A graph-theoretic classification of gene expression microarray data of cancer

Fingerprint verification based on absolute distance and intelligent BPNN

Role of monocytes and macrophages in pathogenesis of SARS

Parametric reconstruction of boundaries and surfaces for medical Imaging

Estimating the reliability of protein-protein interactions

Relationships between structures of hydroxyflavone derivatives and their anti-oxidative activities

Discrimination of virtual environments under visual and haptic rendering delays

Evaluation of a dominance-based rough set approach to interface design

A new approach to calculate the lest context of a tree and its application in defining a constructive, context aware crossover for GP

A bioinformatics based approach to behavioural biometrics

Modeling off light propagation through biological tissues: a novel approach

A direct clustering method for imperfect microarray data without imputation

Towards a mobile and context-aware technology based healthcare system

Learning to drive a real car in 20 minutes

Design of bio-inspired fault-tolerant adaptive routing based on enzymatic feedback control in the cell: Towards averaging load balance in the network

Haptic rendering of drilling into femur bone with graded stiffness

BACKGROUND: Recent advances and automation in DNA sequencing technology has created a vast amount of DNA sequence data. This incre..

Analysis of SD sequences in completed microbial genomes: Non-SD-led genes are as common as SD-led genes

Long-range prediction of population by sex, age and district based on fuzzy theories

Distances between intuitionistic fuzzy sets and their applications in reasoning

On the generalization of fuzzy rough approximation based on asymmetric relation

Mining technical patterns in the U. S. stock market through soft computing

A fuzzy method for learning simple Boolean formulas from examples

B Apolloni, A Brega, D Malchiodi, C Orovas, AM Zanaboni

Managing quality and reliability of products under new challeges: an Australian study

A new approach for the fuzzy shortest path problem

An algorithm for determining the controllers of supervised entities: A case study with the Brazilian Central Bank

The consequential effects of input arrangement in hierarchical fuzzy systems

Mechatronic design and development of an omnimobile spherical robot

Computer-aided design of fuzzy systems based on generic VHDL specifications

On the neural defuzzification methods

Conference Proceedings  |  1995  |  Proceedings of the ACM Symposium on Applied Computing

Conference Proceedings  |  1995  |  Proceedings of the ACM Symposium on Applied Computing

U21 Fellowships for his capacity to inspire, extend and enthuse their students.

To study Dipl.Ing. at TU Darmstadt

FIEEE - Fellow of the Institute of Electrical and Electronic Engineers

Fellow Of Institute Of Electrical And Electronic Engineers (Ieee)

Fellow of Institute of Electrical and Electronic Engineers (IEEE)

Member Of The Panel

Associate Editor Of Editorial Board Of Journal Softcomputing

Associate Editor- Editorial Board Of Journal Control And Intelligent Systems

Associate Editor- Editorial Board of Journal Control and Intelligent Systems