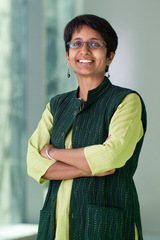 
Bina completed her PhD and MPhil degrees at the University of Oxford, and a Masters in Social Work (Urban and Rural Community Development) from the Tata Institute of Social Sciences, Mumbai. She obtained her Bachelor of Arts degree from Mount Holyoke College in Massachusetts, USA.
Bina was an Australian Research Council DECRA Fellow between 2015-2017. Previous to this, her externally funded research awards included a British Academy Small Grant in 2010 and the UNDP Human Development Fellowship for the Asia Pacific in 2005.
Bina has a professional background of over a decade in the development sector, where she has worked extensively with international NGOs, community organisations and governments in multiple countries. Her professional roles have included project management, as well as research and evaluation consultancies.

Research interests
Bina’s research focuses on gender, migration and social policy, draws on her professional experience, and aims to be relevant to policy practice. Her recent ARC DECRA project titled 'Reason to Care: making the care needs of migrants visible to social policy' analyses the care needs of Ethiopian migrants and refugees in Australia, Kenya and Lebanon. This project evolved from previous research she initiated on Ethiopian migrant domestic workers in the Middle East (with the support of a British Academy Small Grant).
She is keenly interested in feminist interventions in the state and policy processes, and her monograph Transformative Policy for Poor Women: a new feminist framework (Ashgate, 2012) presents an innovative new feminist framework for the analysis of policy in developing countries, and has been welcomed by reviewers as an important contribution to the analysis of the gap between well-intentioned, gender-sensitive policies and their often inadequate implementation.
Other ongoing topics of research interest within developing country contexts include:
* Rural poor women’s land, labour and livelihoods (supported by an Early Career Researcher Grant from the University of Melbourne).
* Queer feminist praxis in the politics of gender, race, class, caste and sexuality - work in this space has focussed on lesbian and gay rights, violence against lesbians in India, and queering perspectives on migration and care.

Crossing the Gulf: Love and Family in Migrant

Ethical Responsiveness and the Politics of Difference

Displaying the 4 most recent projects by Bina Fernandez.

Migration produces re-configurations of care arrangements within households and communities that are often invisible to social policy yet cr..

Migration produces re-configurations of care arrangements within households and communities that are often invisible to social policy yet cr..

Displaying the 34 most recent scholarly works by Bina Fernandez.

Crossing the Gulf: Love and Family in Migrant

Ethical Responsiveness and the Politics of Difference

Dispossession and the Depletion of Social Reproduction

Irregular Migration from Ethiopia to the Gulf States

B Fernandez, A Mundkur, K Beavis

Against the Grain: Indian Women Negotiate Land, Labour and Livelihoods in the New Millennium

Essential yet Invisible: Migrant Domestic Workers in the GCC

This paper presents an overview of the labour market for migrant domestic workers in the Gulf Co-operation (GCC) countries. It dis..

Traffickers, Brokers, Employment Agents, and Social Networks: The Regulation of Intermediaries in the Migration of Ethiopian Domestic Workers to the Middle East

The politics of Foreign Aid for a post-2015 Development Agenda: political parties and public opinion

IN THE SCALES Approaches to Justice

Cheap and disposable? The impact of the global economic crisis on the migration of Ethiopian women domestic workers to the Gulf

Poor Practices: contestations around 'Below Poverty Line' status in India