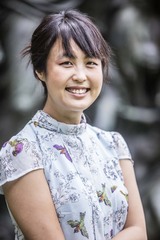 Dr Jee Hyun Kim is a behavioral neuroscientist, whose work focuses on emotional learning and memory during childhood and adolescence.

Kim completed her undergraduate degree at the University of New South Wales (UNSW), graduating with the prestigious University Medal in Psychology.

After completing her PhD in Psychology at UNSW, Kim continued in research as a postdoctoral research fellow at UNSW, followed by the University of Michigan. Kim then gained a position as a Senior Research Officer at the Florey Institute of Neuroscience & Mental Health, before becoming head of the Developmental Psychobiology Laboratory at the institute. Kim is the youngest laboratory head at the Florey.

Kim's research shows that the acquisition and retrieval of fear memories is different across childhood, adolescence, and adulthood. Kim was also the first to demonstrate that fear memories can be permanently erased early in life. Kim’s research uses preclinical paradigms to model human behaviors, in order to understand the neurobiological basis of learning. Specifically, her work investigates the role of memory and forgetting in the development and treatment of two major mental disorders across childhood and adolescence: anxiety disorder and substance abuse disorder. Kim has published over 40 original papers to date, and her work has been cited over 800 times.

Kim is an active science communicator, and has given public lectures at TEDx Melbourne, Australian Museum, National Portrait Gallery, Victorian Science Week, and City of Melbourne. She has written several articles for The Conversation, and has interviewed for ABC Radio, Radio New Zealand, SBS TV, and Channel 10 (The Project). Kim is also a vocal advocate for women in science, and was acknowledged for her work as a proponent in the manuscript of Kate White’s book, 'Building effective career paths for women in science research: a case study of an Australian science research institute'. Kim has completed the National Australian Bank “Realise” female leadership program, and attended “The X-factor: Putting Sex and Gender Under the Microscope in Medical Research” meeting hosted by Perpetual & Women Donors. She has also served on the Florey committee for Equality is Science (EqIS).

Cognition and Related Neural Findings on Methamphetamine Use Disorder: Insights and Treatment Implications From Schizophrenia Research

Adolescent Vulnerability to Methamphetamine Use: Rodent and Human Findings

TOWARDS A HOLISTIC UNDERSTANDING OF METHAMPHETAMINE USE DISORDER: UTILISING TOTAL YEARS OF..

Displaying the 6 most recent projects by Jee Kim.

Memory expression can easily be reduced through the process of extinction, which involves repeated presentations of cues involved in that me..

Exposure therapies rely on the decrease in emotions to previous triggers due to the exposure to those triggers without an emotional event in..

To investigate early life drug abuse and its treatment, drug-consumption and seeking behaviour will be examined in adolescent rats. We expec..

Viral Strategies In The Treatments For Drug Addiction And Anxiety

Extinction Of Drug-Seeking In Adolescence

To investigate the ontogeny of drug abuse and its treatment, acquisition and treatment of drug-seeking behaviour will be examined in adolesc..

Anxiety and addiction are disorders with high co-morbidity that present a major worldwide public health concern. Treatment in both cases oft..

Displaying the 65 most recent scholarly works by Jee Kim.

Cognition and Related Neural Findings on Methamphetamine Use Disorder: Insights and Treatment Implications From Schizophrenia Research

Adolescent Vulnerability to Methamphetamine Use: Rodent and Human Findings

TOWARDS A HOLISTIC UNDERSTANDING OF METHAMPHETAMINE USE DISORDER: UTILISING TOTAL YEARS OF USE AND AGE OF ONSET OF USE TO EXAMINE POTENTIAL PSYCHIATRIC, COGNITIVE, AND GENETIC RISKS AND/OR CONSEQUENCES

Methamphetamine (meth) use is often comorbid with anxiety disorders, with both conditions predominant during adolescence. Conditio..

Neurocircuitry of fear extinction in adult and juvenile rats

Extinction of Conditioned Fear in Adolescents and Adults: A Human fMRI Study

Journal article  |  2017  |  Policy Insights from the Behavioral and Brain Sciences

Anxiety disorders are neurodevelopmental with the median age of onset 10 to 11 years, but developmental processes underlying fear ..

Relapse to drug use is often precipitated by exposure to drug associated cues that evoke craving. Cue-induced drug craving has bee..

In vivo prion models and the disconnection between transmissibility and neurotoxicity

A dissociation between renewal and contextual fear conditioning in juvenile rats

The Effects of 4-Methylethcathinone on Conditioned Place Preference, Locomotor Sensitization, and Anxiety-Like Behavior: A Comparison with Methamphetamine

Youth is not wasted on the young: Commentary on a BBR themed issue on developmental regulation of memory in anxiety and addiction Preface

Ontogeny of memory: An update on 40 years of work on infantile amnesia

A Review of Preclinical Studies to Understand Fear During Adolescence

Role of cues and contexts on drug-seeking behaviour

Developmental rodent models of fear and anxiety: from neurobiology to pharmacology

UPDATING MEMORIES: CHANGING THE INVOLVEMENT OF THE PRELIMBIC CORTEX IN THE EXPRESSION OF AN INFANT FEAR MEMORY

From erasure to inhibition: Dynamic neurochemical mechanisms underlying extinction of fear across development

The role of metabotropic glutamate 5 receptor in addiction

Extinction in preweanling rats does not involve NMDA receptors

Fear Extinction across Development: The Involvement of the Medial Prefrontal Cortex as Assessed by Temporary Inactivation and Immunohistochemistry

The Effect of Temporary Amygdala Inactivation on Extinction and Reextinction of Fear in the Developing Rat: Unlearning as a Potential Mechanism for Extinction Early in Development (vol 28, pg 1282, 2008)

The effect of temporary amygdala inactivation on extinction and reextinction of fear in the developing rat: Unlearning as a potential mechanism for extinction early in development

Excellence in PhD thesis in Psychology

The International College of Neuropsychopharmacology