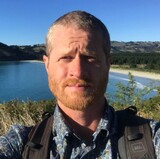 Over the last 10 years, I have been pursuing educational and employment opportunities towards my goal of becoming a molecular and wildlife parasitologist. In 2006 I completed a Masters at the U of New Mexico where I studied phylogenetics of nematodes followed by a year of employment with the National Wildlife Health Center researching the phylogenetics of avian influenza.

In 2008 I relocated to New Zealand, where I was awarded a scholarship from the Marsden Fund, to undertake a PhD (2008-2011) on parasite host specificity, under the supervision of Prof Robert Poulin (Evolutionary and Ecological Parasitology Research Group). During my PhD program, I investigated the host specificity of pathogens using molecular tools. The research conducted during my postgraduate programs has provided me with a very solid grounding in a range of fundamental areas, including biological fieldwork, parasite epidemiology, ecology, biogeography, genetics, and genomics.

In January 2012, I joined Prof Robin Gasser’s Parasite Genetics and Genomics Group as a postdoctoral scientist at the U of Melbourne on grants from the ARC (held by Prof Gasser). In my current position, I am working in close collaboration with the water industry (Melbourne Water Corporation). Specifically, as a CI on a recent ARC Linkage grant (LP160101299 2017-2020), I am directly responsible for the development and application of an integrated monitoring strategy, involving the testing for human-infective parasites in native and introduced wildlife in catchment areas supplying water to the entire human population of Melbourne. Additionally, my interest in the use of applying next generation sequencing techniques to parasitic diagnostics has been expanded with the procurement of another ARC Linkage Grant with Profs Rebecca Traub and Mark Stevenson entitled: Chemo-prevention of tropical canine parasitoses and vector-borne diseases (LP170100187 2018-2020).

Over the last 6 years as an Early Career Researcher I have co-authored over 100 papers with fellow members of the Gasser laboratory and other collaborators. My research has focused mainly on parasitic protists and helminths of animals but has also included surveys of these pathogens in humans through collaborations with Dr Richard Bradbury at the Centers for Disease Control, USA, Drs Margaret Whipp and Geoff Hogg at the Molecular Diagnostic Unit, Dr David Spratt at CSIRO, Prof Ian Beveridge at UOM, Prof Annunziata at the U of Foggia, Italy, and Prof Anja Joachim at the U of Vet Medicine, Austria. I am well versed in the methods and techniques currently used for the phylogenetic analysis of nematodes. I am also immersed in a laboratory containing several bioinformaticians so I am becoming familiar with new approaches to handling and analysing large amounts of data.

Multiplex PCRs for the specific identification of marsupial and deer species from faecal s..

Displaying the 4 most recent projects by Anson Koehler.

This project will determine the prevalence and diversity of established, emerging and novel canine vector-borne agents and endoparasites in ..

This project will determine the prevalence and diversity of established, emerging and novel canine vector-borne agents and endoparasites in ..

Displaying the 103 most recent scholarly works by Anson Koehler.

Bacterial canine vector-borne diseases are responsible for some of the most life-threatening conditions of dogs in the tropics and..

Newborn mammals have an immature immune system that cannot sufficiently protect them against infectious diseases. However, variati..

Use of Markers to Determine Cryptosporidium Genotypes for Epidemiology Tracking and Detection.

A novel metabarcoding diagnostic tool to explore protozoan haemoparasite diversity in mammals: a proof-of-concept study using canines from the tropics

Assessment of a metabarcoding approach for the characterisation of vector-borne bacteria in canines from Bangkok, Thailand

Enterocytozoon bieneusi genotypes in cats and dogs in Victoria, Australia

Parasitic nematodes of humans, animals and plants have a major, adverse impact on global health and agricultural production worldw..

Building an integrated infrastructure for exploring biodiversity: field collections and archives of mammals and parasites

Museum specimens play an increasingly important role in predicting the outcomes and revealing the consequences of anthropogenicall..

There has been a dearth of lipidomic and proteomic data sets to underpin fundamental investigations of parasites and parasitism at..

Arylpyrrole and fipronil analogues that inhibit the motility and/or development of Haemonchus contortus in vitro.

Due to widespread drug resistance in parasitic nematodes, there is a need to develop new anthelmintics. Given the cost and time in..

Due to widespread drug resistance in parasitic nematodes, there is a need to develop new anthelmintics. Given the cost and time in..

The developmental lipidome of Haemonchus contortus

Parasites of the Giant Panda: A Risk Factor in the Conservation of a Species

Application of PCR-Based Tools to Explore Strongyloides Infection in People in Parts of Northern Australia.

Strongyloidiasis, which is caused by infection with the nematode Strongyloides stercoralis, is endemic to areas of northern Austra..

Molecular investigation of Cryptosporidium and Giardia in pre- and post-weaned calves in Hubei Province, China

Genetic diversity in the C-terminus of merozoite surface protein 1 among Plasmodium knowlesi isolates from Selangor and Sabah Borneo, Malaysia

The Beringian Coevolution Project: holistic collections of mammals and associated parasites reveal novel perspectives on evolutionary and environmental change in the North

First survey of Cryptosporidium, Giardia and Enterocytozoon in diarrhoeic children from Wuhan, China

Phylogenetic analysis of the Australasian paralysis ticks and their relatives (Ixodidae: Ixodes: Sternalixodes)

The apicoplast genomes of two taxonomic units of Babesia from sheep

Genomic resources for a unique, low-virulence Babesia taxon from China

Genomic resources for a unique, low-virulence Babesia taxon from China

More parasiticmyositis cases in humans in Australia, and the definition of genetic markers for the causative agents as a basis for molecular diagnosis

Detection of cryptic species of Rugopharynx (Nematoda: Strongylida) from the stomachs of Australian macropodid marsupials

Genetic characterisation of Taenia multiceps cysts from ruminants in Greece

Phylogenomic and biogeographic reconstruction of the Trichinella complex

Molecular detection of Cyclospora in water, soil, vegetables and humans in southern Italy signals a need for improved monitoring by health authorities

Mitochondrial genomes of Trichinella species and genotypes - a basis for diagnosis, and systematic and epidemiological explorations

Genetic variation within and among species of Cloacina (Strongyloidea: Cloacinine) from the swamp wallaby, Wallabia bicolor (Marsupialia: Macropodidae)

Cryptosporidium cuniculus - new records in human and kangaroo in Australia

Genetic identification of an oxyurid from a captive, black-handed spider monkey-implications for treatment and control

First genetic analysis of Cryptosporidium from humans from Tasmania, and identification of a new genotype from a traveller to Bali

Description of Cloacina atthis sp. nov. from the stomach of the euro (Macropus robustus) (Marsupialia: Macropodidae) from Western Australia based on morphological and molecular criteria

Giardia/giardiasis - A perspective on diagnostic and analytical tools

Getting to the guts of the matter: The status and potential of 'omics' research of parasitic protists of the human gastrointestinal system

This book, the successor to Martens, Sables, and Fishers: Biology and Conservation, provides a scientific basis for management and..

Effects of wetland vs. landscape variables on parasite communities of Rana pipiens: links to anthropogenic factors

HOST PARTITIONING BY PARASITES IN AN INTERTIDAL CRUSTACEAN COMMUNITY

Avian influenza at both ends of a migratory flyway: characterizing viral genomic diversity to optimize surveillance plans for North America

Phylogeography of a Holarctic nematode, Soboliphyme baturini, among mustelids: climate change, episodic colonization, and diversification in a complex host-parasite system

A Molecular View of the Superfamily Dioctophymatoidea (Nematoda)

Geographic and host range of the nematode Soboliphyme baturini across Beringia

Displaying the most recent news article by Anson Koehler.