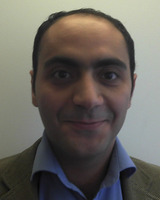 Arman Ahnood is a materials fabrication scientist at Prof. Steven Prawer's group working as part of the Bionic Eye Poject Poject. He received the M.Eng.

degree in engineering from the University of Cambridge, Cambridge, U.K., in 2006 and the Ph.D. degree in electronics and electrical engineering from University College London, London, U.K., in 2011. Between 2010 and 2012 he was a research associate at the University College London and University of Cambridge, U.K working on the design of novel device structures and circuits to mitigate the inherent limitations of disordered semiconductors. Between 2006 and 2007, as a Design Engineer at Hoare-Lea, London, U.K., he was involved in a number of renewable energy projects. He has done internships at Philips Research Lab, U.K., on compact modeling of silicon thin-film transistors, and at Genapta, U.K., on design of high-speed and accurate motion control system for florescence array spectroscopy. Arman is a member of the Materials Research Society and the Society for Information Displays, and an associated member of the Institute of the Physics and the Institute of Materials, Minerals, and Mining.

The role of CdCl2 treatments and annealing in the formation of sintered CdTe nanocrystal s..

Displaying the 2 most recent projects by Arman Ahnood.

Displaying the 35 most recent scholarly works by Arman Ahnood.

Numerous applications would be enabled by pixels for multispectral imaging whose spectral responses can be dynamically tuned and t..

Brazing techniques for the fabrication of biocompatible carbon-based electronic devices

Development of a Magnetic Attachment Method for Bionic Eye Applications

Top Down Scale-Up of Semiconducting Nanostructures for Large Area Electronics

An all-diamond, hermetic electrical feedthrough array for a retinal prosthesis

Flexible Electronics: The Next Ubiquitous Platform

Complementary Metal Oxide Semiconductor Technology With and On Paper

A Ahnood, G Reza Chaji, A Sazonov, A Nathan

M Bauza, NP Mandal, A Ahnood, A Sazonov, A Nathan

Doctorate in Electronics and Electrical Engineering