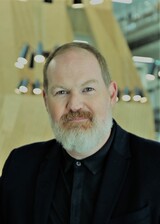 Professor Alan Pert became Director of Melbourne School of Design in October 2012. As Director his role is to shape a distinctive Identity for the MSD and to inspire learning through interdisciplinary reflection, and its integration of research, teaching, and practice.


Pert is internationally known for his creative practice research having received a number of awards for his built projects as principal of NORD, while in the UK. He was featured in the ‘Faces of British Architecture’ exhibition in 2012, which celebrated the UK’s leading experts, innovators and visionaries in architecture and engineering, responsible for many iconic buildings and landmark developments.
Pert, carries out practice-based research, analysing and forging propositions across writing, discourse, exhibitions, education and building. He has worked extensively as an architect, exhibition designer, and curator while concurrently holding a role as Professor of Architecture. In Australia he is a principal of PARALLEL PRACTICE, a design research Lab dedicated to the advancement of design innovation, interdisciplinary collaboration, and an intensive dialogue with construction practices.
Pert has also been Chair of The Melbourne Housing Expo (IBA) Board since 2016. The International Building Exhibition (IBA) seeks to change the face of affordable housing across the State of Victoria and seeks to find answers to the most pressing issues facing modern Melbourne. IBA believes that a building exhibition is much more than a mere exhibition. It is an instrument of visionary urban development. As an architect and academic, Pert believes ‘today’s ‘designer’ must be nimble enough to move between the art and the science of building and among the social, cultural, political and economic fog that surrounds our disciplines.’
As academia shifts it’s research agenda to focus on Impact, and as practice considers new ways of working to cope with an ever changing world of construction, there are big opportunities to form partnerships beyond the reach of conventional architectural and urban design consultancies, which are distinctively placed to devise research-led solutions for unusual situations and special challenges.

Can the physical environment itself influence neurological patient activity?

Designing for wellbeing in children’s hospitals

Evidence and speculation: reimagining approaches to architecture and research within the p..

Displaying the 9 most recent projects by Alan Pert.

The Impact Of Building Standards On Architects In Practice

The environmental design of healthcare facilities has been shown to directly affect the wellbeing of patients and their families. Poorly des..

The environmental design of healthcare facilities has been shown to directly affect the wellbeing of patients and their families. Poorly des..

Displaying the 21 most recent scholarly works by Alan Pert.

Can the physical environment itself influence neurological patient activity?

Exhibition materials, including archival drawings, documentation, interviews, print media and the creation of a publication and 3D..

Evidence and speculation: reimagining approaches to architecture and research within the paediatric hospital

Dementia, ageing, and the city: learning from the streets of Melbourne

Boler’s Pedagogy of Discomfort: Examining a Turn of the Century Idea for Contemporary Architectural Education

Fooks - The House Talks Back

'Ernest Fooks - The House Talks Back': Between the Savage Mind and the Scientific Mind

Austria to Australia, Fuchs to Fooks

Fooks, Rudofsky and Henard: Thoughts on Sandals and a Pair of Nike - The Street

Agile housing for an ageing Australia

An Interim Institution: Between Ruin and Restoration at St Peter's Seminary

Constructed. Design of New Furniture Gallery including the Conversion of a derelict gallery space.

Displaying the 3 most recent news articles by Alan Pert.

Designing for wellbeing in children’s hospitals

Build me up: how architecture can affect emotions

Fellow of the Royal Scottish Academy

Fellow of the Royal Institute of Architects