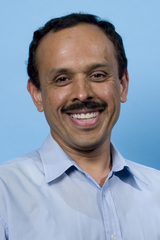 Dr Udaya Parampalli was born in the Udupi district of Karnataka, India. He received the BEng degree from Mysore University in 1985 and the MTech and PhD degrees from Indian Institute of Technology (I.I.T), Kanpur, in 1986 and 1993, respectively, all in Electrical Engineering.

He was a research scholar at I.I.T, Kanpur from 1985 to 1991. From 1992 to July 1996, he was a Member Research Staff at Central Research Laboratory, Bangalore. From 1997 to 2002, he was an ARC Research Associate at the Department of Mathematics, RMIT University, Melbourne, Australia.

He joined the University of Melbourne, in February 2000, where he is currently a Professor in School of Computing and Information Systems. In 2008, he was a visiting professor at Department of Computer Science, University of Calgary, Canada.

His research activity is marked by more than 150 peer-reviewed publications in major refereed conferences and journals with a strong research focus on pseudo-random sequences, network security, cryptography, and cybersecurity. He has supervised several Research Higher Degree students. He actively participates in curriculum design and has led the School through accreditation of its degrees. He has engaged at a senior level with conference activities and is a reviewer for several international journals and conferences in sequences and cryptography research.
His current research interests include Cybersecurity, coding theory, cryptography, and applications of sequences in information hiding and communications.

Data61 - Ssa - On The Design Of Private, Anonymous And Trustless Protocols In Public Block..

Displaying the 15 most recent projects by Udaya Parampalli.

Data61 - Ssa - On The Design Of Private, Anonymous And Trustless Protocols In Public Blockchains (Crp - Big Data And Security - Sinnott)

Automobile radar systems are an important technology for improving road safety by providing advanced driver warnings in vehicles. Though suc..

The project addresses the holy grail in the area of Reed-Solomon/BCH decoding, namely the derivation of algebraic soft-decision decoding alg..

Displaying the 142 most recent scholarly works by Udaya Parampalli.

The number of small sophisticated wireless sensors which share the electromagnetic spectrum is expected to grow rapidly over the n..

Ethereum's Gas mechanism attempts to set transaction fees in accordance with the computational cost of transaction execution: a co..

this paper presents a capacity-improved Spread Spectrum (SS) watermarking method for data hiding and security for medical image an..

A Family of Polyphase Sequences With Asymptotically Optimal Correlation

© 2018 Association for Computing Machinery. In Sprout, a new design principle is proposed to resist the Time-Memory-Data Tradeoff ..

Special Section on Signal Design and Its Applications in Communications FOREWORD

Tone Code : A Novel Method for Covert Communications Based on Musical Components

Conference Proceedings  |  2016  |  Proceedings of 2016 International Symposium on Information Theory and Its Applications, ISITA 2016

Properties of an Emergency Broadcasting System Based on Audio Data Hiding

T Kojima, A Oizumi, U Parampalli

Special Section on Signal Design and Its Applications in Communications FOREWORD

An emerging class of Location Based Services (LBSs) needs verified mobile device locations for service provision. For example, an ..

Conference Proceedings  |  2014  |  Proceedings of 2014 International Symposium on Information Theory and Its Applications, ISITA 2014

A blind digital watermarking scheme based on complete complementary codes

On The Relative Abundance of Nonbinary Sequences with Perfect Autocorrelations

A Large Class of p-Ary Cyclic Codes and Sequence Families

New families of arrays in two dimensions for watermarking applications

On the Noncyclic Property of Sylvester Hadamard Matrices

Partial Correlations of Sequences and Their Applications

Conference Proceedings  |  2009  |  IWSDA'09: PROCEEDINGS OF THE FOURTH INTERNATIONAL WORKSHOP ON SIGNAL DESIGN AND ITS APPLICATIONS IN COMMUNICATIONS

A trusted approach to e-commerce

A scalable sampling scheme for clustering in network traffic analysis

A note on the optimal quadriphase sequences families

Conference Proceedings  |  2007  |  Proceedings of the 8th International Conference on Parallel and Distributed Computing, Applications and Technologies

Applying a cryptographic scheme in the RPINA protocol

A root-finding algorithm for list decoding of Reed-Muller codes

On Connection Between Z4 and Quadratic Form Sequences

On the aperiodic correlation function of galois ring m-sequences

Cyclic codes over a linear companion of Z4

Department of Computer Science and Software Engineering, University of Melbourne
1985

Department of Education, Government of India

The Institute of Electronics, Information and Communication Engineers