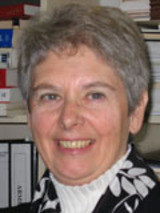 Cally Jordan has degrees in both civil law and common law (LL.B/B.C.L. McGill University; D.E.A., Université de Paris I (Panthéon-Sorbonne)) which she obtained after a B.A., with distinction (Carleton) and a M.A.

(University of Toronto). For her graduate work in Paris, she studied with Professors Jacques Ghestin, Genevieve Viney and Paul Lagarde. She has practised law in Canada, New York, California and Hong Kong and spent several years in the New York office of Cleary, Gottlieb, Steen & Hamilton working in the area of international finance.

Between 1991 and 1996, she was an Associate Professor at the Faculty of Law at McGill University and member of the Institute of Comparative and Private Law. More recently, she spent 2010 as a Visiting Professor at Duke Law School, Durham, North Carolina and taught for a semester in 2011 at Georgetown's Center for Transnational Legal Studies in London. Since then she has been a visiting fellow at the Max Planck Institute for International and Comparative Law in Hamburg (2012), the London School of Economics (2013), the British Institute for International and Comparative Law (2013) and the inaugural P.R.I.M.E Finance Fellow at the Netherlands Institute for Advanced Studies outside The Hague (2013). In 2014, she will be a Dean's Visiting Scholar at Georgetown Law Center in Washington, DC.

She is a frequent speaker on corporate governance, capital markets and corporate law. She is the author of proposals for the reform of Hong Kong companies law and spent nearly five years living in Asia.

Success and Failure in Stock Exchange Consolidations: Implications for Markets and their Regulation

Success And Failure In Stock Exchange Consolidations: Implications For Markets And Their R..

Centre Of Excellence For International Finance And Regulation

Displaying the 2 most recent projects by Cally Jordan.

Success And Failure In Stock Exchange Consolidations: Implications For Markets And Their Regulation

Centre Of Excellence For International Finance And Regulation

Displaying the 23 most recent scholarly works by Cally Jordan.

Success and Failure in Stock Exchange Consolidations: Implications for Markets and their Regulation

The wider context: the future of capital market regulation in the developed markets

How should market infrastructure instituition governance be regulated?

Prospects for securitisation in transition economies

Diversity and resilience: Lessons from the financial crisis

Which way for market institutions: The fundamental question of self-regulation

The chameleon effect: Beyond the bonding hypothesis for cross-listed securities

The conundrum of corporate governance

Regulatory harmonization and the globalization of finance

Financial regulatory harmonization and the globalization of finance

How effective are capital markets in exerting governance on corporations?

Comment on "An alternative regulatory model for Canada": A view from afar