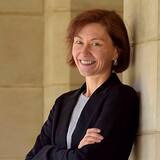 Prior to joining The University of Melbourne in September 2017, she was Professor of Applied Mathematics at Monash University, where she was also Head of the School of Mathematical Sciences (2009-2014), and inaugural Director of the Monash Academy for Cross & Interdisciplinary Mathematical Applications (MAXIMA) from 2013-2017. She was also previously Head of the School of Engineering and Information Technology at Deakin University (2006-2009) with a Chair in Engineering. She obtained her first Professorship in Information Technology at Monash University, where she worked from 1996-2006. Professorships in three disciplines (mathematics, engineering, and information technology) have given her an interdisciplinary breadth reflected in much of her research.

Kate obtained a B.Sc(Hons) in Mathematics and a Ph.D. in Electrical Engineering, both from The University of Melbourne. Commencing her academic career in 1996, she has published 2 books on neural networks and data mining, and over 260 refereed journal and international conference papers in the areas of neural networks, optimisation, data mining, and various applied mathematics topics. She has supervised to completion 25 PhD students, and has been awarded over AUD$12 million in competitive grants, including 12 Australian Research Council grants and industry awards.

Kate was elected Fellow of the Institute of Engineers Australia (FIEAust) in 2006, and Fellow of the Australian Mathematical Society (FAustMS) in 2008. Awards include: the Australian Mathematical Society Medal in 2010 for distinguished research; the EO Tuck Medal from ANZIAM in 2017 for outstanding research and distinguished service; and the Monash University Vice-Chancellor’s Award for Excellence in Postgraduate Supervision in 2012.

In addition to her academic activities, she regularly acts as a consultant to industry in the areas of optimisation, data mining, and intelligent systems. She is also actively involved in mentoring, particularly with the aim of encouraging greater female participation in mathematics, and she is Chair of the Advisory Board for the AMSI Choose Maths program.

Further information can be found at katesmithmiles.wixsite.com/home

Optimising Progress Towards Elimination Of Malaria

On normalization and algorithm selection for unsupervised outlier detection

Foundations And Analysis Of Ai

Algorithms are everywhere but what will it take for us to trust them?

Displaying the 6 most recent projects by Kate Smith-Miles.

Optimising Progress Towards Elimination Of Malaria

Foundations And Analysis Of Ai

This project aims to address the mathematical challenges in automated early detection and classification of intrusion events in noisy time s..

This project aims to develop a new paradigm in algorithm testing, creating novel test instances and tools to elicit insights into algorithm ..

This project aims to develop a new paradigm in algorithm testing, creating novel test instances and tools to elicit insights into algorithm ..

Displaying the 202 most recent scholarly works by Kate Smith-Miles.

Practical constrained optimization models are often large, and solving them in a reasonable time is a challenge in many applicatio..

On normalization and algorithm selection for unsupervised outlier detection

This paper presents a method to generate diverse and challenging new test instances for continuous black-box optimization. Each in..

The School Bus Routing Problem: An Analysis and Algorithm

Mario A Munoz, Kate A Smith-Miles

Classes of structures in the stable atmospheric boundary layer

Effects of function translation and dimensionality reduction on landscape analysis

Towards objective measures of algorithm performance across instance space

On the optimization of Gegenbauer operational matrix of integration

How to Extract Meaningful Shapes from Noisy Time-Series Subsequences?

Method for Optimizing Coating Properties Based on an Evolutionary Algorithm Approach

Discovering the suitability of optimisation algorithms by learning from evolved instances

Context-aware fusion: A case study on fusion of gait and face for human identification in video

Meta-Learning for Data Summarization Based on Instance Selection Method

On the communal analysis suspicion. scoring for identity crime in streaming credit applications

Adaptive fusion of gait and face for human identification in video

Adaptive fusion of gait and face for human identification in video

The most critical component of kernel based learning algorithms is the choice of an appropriate kernel and its optimal parameters...

Meta-learning: From classification to forecasting, to optimization, and beyond

Association rule mining is one of the most widely used data mining techniques. To achieve a better performance, many efficient alg..

With the advancement of storage, retrieval, and network technologies today, the amount of information available to each organizati..

On learning algorithm selection for classification

A clustering algorithm based on an estimated distribution model

Optimization via intermittency with a self-organizing neural network

FOM: A framework for metaheuristic optimization

Evolutionary rule generation classification and its application to multi-class data

A DTD for an XML-based mathematical modeling language

A taxonomy for inter-model parallelism in high performance data mining

Neural networks in business: techniques and applications for the operations researcher

A comparison of fitness functions for evolutionary rule generation

Neural networks for combinatorial optimization: A review of more than a decade of research

Neural versus traditional approaches to the location of interacting hub facilities

A unified framework for chaotic neural-network approaches to combinatorial optimization

A genetic algorithm for the channel assignment problem

Neural versus traditional approaches to the location of interacting hub facilities

Displaying the 3 most recent news articles by Kate Smith-Miles.

Algorithms are everywhere but what will it take for us to trust them?

Awarded for outstanding research and distinguished service in applied mathematics

Awarded for distinguished research in mathematics

FIEAUST - Fellow of the Institution of Engineers of Australia