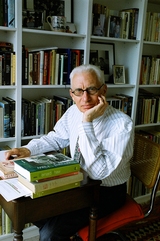 Emeritus Professor Ian Donaldson is a graduate of Melbourne and Oxford Universities. He was tutorial Fellow in English at Wadham College Oxford throughout the 1960s, and with F. W. Bateson and Christopher Ricks edited the Oxford journal Essays in Criticism.

He is a Fellow of the British Academy and the Royal Society of Edinburgh, and Fellow and Past President of the Australian Academy of the Humanities. He is Emeritus Professor and honorary D.Univ. at ANU, and honorary D.Litt. of the University of Melbourne, where he is also a Fellow of Trinity College.

His books include The World Upside-Down: Comedy From Jonson to Fielding (1970), Ben Jonson: Poems (1975), The Rapes of Lucretia: A Myth and its Transformations (1982), Ben Jonson (1985), Jonson’s Magic Houses: Essays in Interpretation (1997), and Ben Jonson: A Life (2011). He is a General Editor, with David Bevington and Martin Butler, of The Cambridge Edition of the Works of Ben Jonson, published as Print Edition in 7 volumes in 2012, and as an Online Edition (of roughly four times that size) in 2015-16. He is currently working on a book provisionally entitled The Death of Shakespeare: Literary Britain in 1616, and an account of touching and its taboos.

Why was Shakespeare's death such a non-event at the time?

Why was Shakespeare’s death such a non-event at the time?

The Making of the Cambridge Edition

Talking with Ghosts: Ben Jonson and the English Civil War

Displaying the 21 most recent scholarly works by Ian Donaldson.

Why was Shakespeare’s death such a non-event at the time?

The Making of the Cambridge Edition

Talking with Ghosts: Ben Jonson and the English Civil War

The Idea of an Academy

Shakespeare, Jonson and the Invention of the Author

Review of Slowly the poison: William Empson, Profiles in world lIterature and ideas

Syncrisis: the figure of contestation

Matters of Life and Death: The Return of Biography

In his new collection of biographical, critical, and historical essays, Ian Donaldson challenges many long-held and recent assumpt..

Australia and the European Imagination Papers from a Conference Held at the Humanities Research Centre, Australian National University, May 1981

These topoi did not only exert their influence on Joseph Banks' imagination, for Cook's own remarks on the natives of New South W..

The Rapes of Lucretia A Myth and Its Transformations

The World Upside Down Comedy from Jonson to Fielding

Displaying the most recent news article by Ian Donaldson.

Why was Shakespeare's death such a non-event at the time?

FRSE - Fellow of the Royal Society of Edinburgh

FBA - Fellow of the British Academy

Honorary Doctor of the University