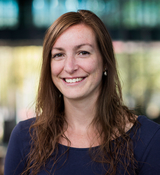 Dr Simone Hendrikse is currently a McKenzie Postdoctoral Fellow in the group of Prof Amanda Ellis and Prof Sally Gras. Her research is focused on DNA Nanomaterials to investigate cell-cell communication, and biomaterials for organoid culture.Dr.

Simone Hendrikse completed a Bachelor in Chemistry from the Hogeschool Zuyd, the Netherlands, in 2011 after doing internships at the Tshwane University of Technology, South Africa, and the Eindhoven University of Technology, the Netherlands. Hereafter she followed a transition year (pre-master's) before starting a Master in Biomedical Engineering at the Eindhoven University of Technology. In 2014, she concluded her Master with a research project at the Wyss Institute for Biologically Inspired Engineering, USA, in the group of Prof. William Shih studying the controlled polymerization and cellular uptake of DNA origami structures. In the last part of her master, she performed an internship at the Eindhoven University of Technology in the group of Prof. Patricia Dankers synthesizing and investigating laminin enriched supramolecular hydrogels as biomaterials for intestinal organoid expansion. Afterwards, she started her PhD at the Eindhoven University of Technology, the Netherlands, in the group of Prof. Bert Meijer, which she completed in October 2018. During her PhD she designed, synthesized and tested various supramolecular biomaterials for intestinal and liver organoid expansion. Both fundamental studies were conducted as well as cell experiments. After a brief Post-Doc in the same group, and working with Prof. Hans Clevers, she started as a Research Fellow at the University of Melbourne in the group of Prof. Amanda Ellis and Prof. Sally Gras in May 2019 working on the non-enzymatic synthesis of DNA using DNA hybrid materials. As of January 2020, she commences as a McKenzie Postdoctoral Fellow, a prestigious fellowship from the University of Melbourne (3 years fully funded, only 10 given yearly university-wide), where she aims to build an artificial molecular highway to investigate cell-cell trafficking and communication.

Opportunities and Challenges in DNA-Hybrid Nanomaterials

An Artificial Highway For Extracellular Trafficking And Communication

From supramolecular polymers to multi-component biomaterials

Early in-situ cellularization of a supramolecular vascular graft is modified by synthetic ..

Displaying the most recent project by Simone Hendrikse.

An Artificial Highway For Extracellular Trafficking And Communication

Displaying the 8 most recent scholarly works by Simone Hendrikse.

Opportunities and Challenges in DNA-Hybrid Nanomaterials

Nature has inspired the development of many life-like materials. Although still simplistic, key biological functionalities have be..

From supramolecular polymers to multi-component biomaterials