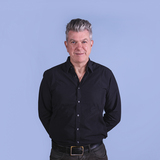 Stephen Haley, School of Art Dr Stephen Haley is a visual artist and a writer. Stephen came relatively late to art having completing a BA in the History and Philosophy of Science at the University of Melbourne.

There followed a peripatetic period, travelling widely and working in a variety of appalling jobs until 28 years of age. Since then he has completed a BFA (RMIT), a Postgraduate Diploma (Victorian College of the Arts), a Master of Fine Art (Victorian College of the Arts) and a PhD (University of Melbourne). He has been a lecturer and tutor in Visual Art History and Theory as well as Painting Studio at Monash University, RMIT and the Victorian College of the Arts where he has lectured in various capacities since 2000. Stephen also has an extensive writing record, publishing a large number of critical essays, reviews and catalogue essays. Working primarily with painting and digital media, Stephen has produced over 20 solo exhibitions and participated in over 120 curated group exhibitions locally and internationally. His recent work is concerned with Western space - both actual and virtual - and how the actual is increasingly supplanted and preceded by the virtual forms of the digital model. The work regularly employs 3D modelling software to construct paintings, photographs and video works that play on repetition and difference. The iconography is often drawn from the localized landscape of the suburbs and the poetics of the mirror. The mirror as the defining metasign of our age, both as metaphor and defining mechanism, was the subject of his PhD thesis. Stephen's work features in wide number of local and international collections and has won several awards including the Deacon, Graham and James/Arts 21 Residency Award, the ANZ Visual Arts Fellowship Award, the R M McGivern Acquisitive Prize for Painting, the Australia Council Visual Arts Board studio residency in Los Angeles, the Australia Council Visual Arts Board New Work Grant and an Arts Victoria New Work Grant. In 2012 Somewhere About Now - a survey exhibition of his recent work was held at the City of Glen Eira Art Gallery. Stephen has coordinated the MFA(Visual Art) course since 2008 and has implemented a variety of innovations that have improved on the already proud tradition and record of one of Australia's most highly regarded graduate courses in art. He is an active member of various Faculty committees, supervises into the PhD, MFA, MCA and Honours courses. He also teaches into the undergraduate area and pops up in all manner of unlikely roles across the Faculty and the University.

Displaying the most recent project by Stephen Haley.

Displaying the 141 most recent scholarly works by Stephen Haley.

Three recent works of mine shown in a major curated group exhibition regarding the role of art, particularly painting, in the incr..

Anna Madeleine's Last Call then, is a call to you. A playful call that, while it shares some of the melancholy and sadness of thos..

A Small Exhibition of Imperfect Paintings

Digital: The World of Alternative Realities

Critical Work as a Creative Practitioner

Beyond VCA and MCM: Research and Collaboration

A forum presentation at the VCA Research Library Week on the two year research residency and exhibition collaboration between VCA ..

Seeing to a Distance: Single-Channel Video Work from Australia

At Home in the World

Words on Place, in Space

Through a glass, brightly

when you think about art

An interview with Percy Parr-Ire

Drawing to a Beginning: The drawings of Jon Cattapan

A reflection, on glass

The Spirit of Football

Scaling up at ACCA

The Idea of Exhibiting Art

Structures of Possibility: The Art of John Dunkley-Smith

Visual Arts Board of the Australia Council
2007

Victorian College of the Arts
2006

Visual Arts Board of the Australia Council
2004

National Association of the Visual Arts