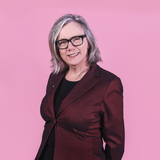 The University Of Melbourne

Su Baker is an artist, Pro Vice-Chancellor Community and Cultural Partnerships, and also the Director of Centre of Visual Arts (CoVA) at the University of Melbourne. She has more than twenty-five years’ experience in teaching, research and senior management accrued at Sydney College of the Arts, University of Sydney, and most recently, Victorian College of the Arts (VCA) where she was ten years, Head of the School of Art, and seven years, Director of the VCA.

She is President of the Australian Council of Deans and Directors of Creative Arts, and previously has been Chair of the Australian Council of University Art and Design Schools (2004–08). Su is Chair of the Sturt Street Arts Precinct Forum and Editor in Chief of Art + Australia, the journal having been recently donated to the VCA by Eleonora Triguboff. Su Baker is a leading arts academic and artist, who is called upon for expert advice and has written on the shifting needs of arts education and the role of the Art School in the 21st Century, including "Art School 2.0 : Art Schools in the Information Age or Reciprocal Relations and the Art of the Possible, in Rethinking the Contemporary Art School, The Artist, the PhD and the Academy", NSCAD Press, 2009. She has been Chair of the Australian Council of University Art and Design Schools (2004-2008). Through this role she played an active role in the recognition of the research in the Creative Arts advising the ARC in the development of the RQF and the recent ERA process. Her work in these roles has led to the establishment of the new Council of Deans and Directors of Creative Arts, to which she was elected President in February 2013. Su Baker has exhibited nationally over the last 20+ years in public and commercial galleries, including numerous solo and selected group exhibitions and national survey shows including in a number of curated exhibitions at State Galleries and significant contemporary art venues. These include Perspecta '89 at the Art Gallery of NSW and Dissonance, at Artspace in Sydney 1991. First solo exhibition in 1983 at Galerie Dusseldorf, Perth, and has exhibited regularly in Perth, Melbourne and Sydney. In 2001 Galerie Dusseldorf on Perth, ALLAN BAKER + SU BAKER, a show of work by father and daughter. In Melbourne, Su has been represented and exhibited with John Buckley Gallery and Nicholas Thompson Gallery.

Displaying the 2 most recent projects by Su Baker.

Displaying the 21 most recent scholarly works by Su Baker.

Interference as a Strategy for Art: The Second International Conference on Transdisciplinary Imaging at the intersections between Art, Science and Culture

Conference Proceedings  |  2013  |  Interference as a Strategy for Art

The War is Over

Conversations to infinity: On arts schools and art education

Art School 2.0: Art Schools in the Information Age or Reciprocal Relations and the Art of the Possible

Mis-en-scen: Reflections on the Screen

Displaying the 2 most recent news articles by Su Baker.

2000
Australia Council for the Arts