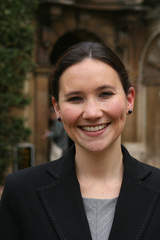 Associate Professor Alysia Blackham is an internationally renowned expert on age discrimination law and the consequences of ageing for workplaces. Her innovative research focuses on the intersection of employment law, equality law and public law, using empirical evidence to cast new light on legal problems.

Funded by an Australian Research Council Discovery Early Career Researcher grant (DE170100228 "Addressing Age Discrimination in Employment”), Alysia is exploring the ways in which age discrimination law is enforced in Australia and the UK, and the barriers to effectively addressing age discrimination at work. The results of this project may be explored at http://ageworks.info/

Alysia has published extensively across leading Australian and international journals and in legal and interdisciplinary forums. Her award-winning monograph, Extending Working Life for Older Workers: Age Discrimination Law, Policy and Practice (Hart, 2016), won second prize in the UK Society of Legal Scholars' Peter Birks Prizes for Outstanding Legal Scholarship in 2017, one of the most prestigious awards in UK legal publishing. She has also co-edited two influential edited collections, New Frontiers in Empirical Labour Law Research (Hart, 2015) and Theorising Labour Law in a Changing World: Towards Inclusive Labour Law (Hart, 2019). Alysia is regularly invited to present her scholarship in Australia and internationally.

Alysia has worked as an academic in Australia, Sweden and the UK, including as the Turpin-Lipstein Fellow and College Lecturer in Law and Director of Studies at Clare College, Cambridge and an Affiliated Lecturer at the Faculty of Law at the University of Cambridge. Alysia also has experience of legal practice and organisational management, having worked as an employment law solicitor at Herbert Smith Freehills in Sydney, and Executive Officer to the Deputy Vice-Chancellor (Corporate Services) at the University of Technology, Sydney.

Reforming Responses to the Challenges of Judicial Incapacity

Discrimination in a pandemic

Why Do Employment Age Discrimination Cases Fail? An Analysis of Australian Case Law

Displaying the 3 most recent projects by Alysia Blackham.

Workability And The Ageing Population

Displaying the 58 most recent scholarly works by Alysia Blackham.

Reforming Responses to the Challenges of Judicial Incapacity

A Lynch, A Blackham

Judicial incapacity, while under-researched, presents unique challenges for supporting and responding to issues of judicial perfor..

Why Do Employment Age Discrimination Cases Fail? An Analysis of Australian Case Law

Interrogating the ‘Dignity’ Argument for Mandatory Retirement: An Undignified Development?

Human dignity is often cited as a justification and foundation for equality law. However, it is also used in some contexts to just..

Resolving Discrimination Claims outside the Courts: Alternative Dispute Resolution in Australia and the United Kingdom

An experimentalist approach to equality: a case study of retirement in the UK university sector

Experimentalism is a theory of regulation in which change is achieved via a process of ‘directly deliberative polyarchy’ within an..

The Self-Employed and the Welfare State in the EU: Insights from Gender and Race Equality Law

Judges fulfil a fundamental constitutional role in democratic systems. Most research on judges, though, focuses on the public and ..

Young workers occupy a particularly vulnerable position in the contemporary labour market. While this may partly be attributable t..

THE GROWING IMPERATIVE TO REFORM ETHICAL REGULATION OF FORMER JUDGES

As individuals live longer, healthier lives, both Australia and New Zealand are experiencing a dramatic demographic shift. In an e..

Judicial diversity and mandatory retirement: Obstacle or route to diversity?

A diverse judiciary is essential for a democratic society. While considerable attention has been paid to how judicial diversity ca..

'We are all Entrepreneurs Now': Options and New Approaches for Adapting Equality Law for the “Gig Economy”

As the world of work moves to increasingly precarious, temporary and insecure forms of labour, traditional forms of work regulatio..

Legal scholars are increasingly attuned to the substantial benefits that can be derived from empirical and socio-legal scholarship..

A Compromised Balance? A Comparative Examination of Exceptions to Age Discrimination Law in Australia and the UK

Exceptions to discrimination law reveal both tensions and telling compromises regarding the boundaries of the equality principle. ..

The erosion of the standard employment relationship, the proliferation of diverse work arrangements, and the resulting gaps in leg..

Addressing the ageing workforce: a critical examination of legal policy objectives and values in the United Kingdom

While retirement ages have been removed for the majority of the UK workforce, the judiciary remains one of the few professions tha..

Population ageing is a challenge facing governments across the Organisation for Economic Co-operation and Development. In a bid to..

Judicial diversity and mandatory retirement: Obstacle or route to diversity?

A diverse judiciary is essential for a democratic society. While considerable attention has been paid to how judicial diversity ca..

The abolition of the UK default retirement age (DRA) poses particular challenges for universities. However, it is still unclear ho..

Reflexive change? A quantitative review of the impact of the Equality Act 2010 on age equality measures in organizations

Journal article  |  2016  |  International Journal of Discrimination and the Law

Legitimacy and Empirical Evidence in the UK Courts

This edited collection takes a multi-disciplinary approach to the ‘Active Ageing’ agenda to enable readers to consider the implica..

Social Media and the Judiciary: A Challenge to Judicial Independence?

This volume brings together some of Australia's leading constitutional scholars to discuss judicial independence and its contempor..

Managing without default retirement in universities: a comparative picture from Australia

The presumption of advancement: a lingering shadow in UK Law?

Falling on Their Feet: Young Workers, Employment and Age Discrimination

Self-employed: The implementation of Directive 2010/14 on the application of the principle of equal treatment between men and women engaged in an activity in a self-employed capacity

Journal article  |  2015  |  Public Law: the constitutional and administrative law of the commonwealth

A BLACKHAM, A Ludlow

Self-employment in EU Member States: The Role for Equality Law

Tackling Age Discrimination against Older Workers: A Comparative Analysis of Laws in the United Kingdom and Finland

Social Media and the Courts

A Proposal for Enhanced Supervision of the Refugee Convention

The accountability of members of Australia's federal parliament for misconduct

The Appointment of Ministers from Outside of Parliament

Justice and the Law
Law
Work and Institutional Development

Displaying the 6 most recent news articles by Alysia Blackham.

Discrimination in a pandemic

We need to talk about discrimination law – without all the rancor

Challenging discrimination in the gig economy

Why mandatory retirement ages should be a thing of the past

Research Committee on Sociology of Law

The College of Law