This special one-off event is proudly supported by Contemporary Art Tasmania. It forms part of The Ghosts of Nothing In Memory of Johnny B. Goode – World Tour of Abandoned Gaol-Houses 2016-2017. This is a continuation of an ongoing open-ended artwork, which first began in 2014 and will wind up with a series of exhibitions in 2018. The unifying concept behind In Memory of Johnny B. Goode is the fictional world of an imaginary rock band. This made-up world is presented to the public as an exuberant array of objects and events, some real and some unreal. It anachronistically fuses an invented rock-star figure – Johnny B. Goode – with the fin-de-siècle tragic clown known as Pierrot. To date.. 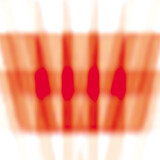