In an indoor evacuation scenario, an early decision to be made by each occupant is when to initiate the (decisive) evacuation movement, a decision that determines the pre-evacuation (or pre-movement) time. We employ a class of econometric models, proportional hazard duration models, to simulate the probabilistic relation between the pre-movement times and the occupant’s proximity to exits at the onset of evacuations. This is based on the empirically-supported assumption that occupants that are relatively further from exit locations when the evacuation cue is perceived, take relatively longer times to initiate their evacuation movement. Implementing these parametric models and using extensive.. 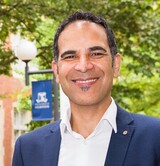