Dr Black examined alternative approaches to film production She determined that when performance is used as an initiator to film development it not only provides a more collaborative process but also enables the ability for more authentic screen performances. Her findings produced a successful feature film The Five Provocations that demonstrates a working method for working with cast to develop story. The Five Provocations is a ninety-four-minute, fictional, magic-realist, ensemble drama feature film that investigates the process of crafting and capturing performance on film. 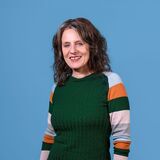